Question about Ikkyu anecdote in “3 Pillars of Zen”

I've loved this English Zen fable since I was a teenager, but not sure of the correct kanji translation for "attention" - is it 念?

One day a man of the people said to Zen Master Ikkyu: “Master, will you please write for me some maxims of the highest wisdom?”

Ikkyu immediately took his brush and wrote the word, “Attention.”

“Is that all?” asked the man. “Will you not add something more?”

“Well,” remarked the man rather irritably, “I really don’t see much depth or subtlety in what you have just written.”

Half angered, the man demanded: “What does that word ‘Attention’ mean anyway?”

I observe this is sometimes translated into "マインドフルネス:Mindfulness" which is reverse imported into Japan, being popular among businessmen and practiced in the retreat.

I am not a Zen Buddhist scholar and believe the correct translation is still in the debate, so I borrowed the explanation in the wikipedia entry: "マインドフルネス".

So, its etymology should be Pāḷi language: sati and Sanskrit: smṛti. And it is sometimes translated as the "mindfulness" in English language.

The wikipedia entry lists up the "Attention" and it's counterparts in Japanese. 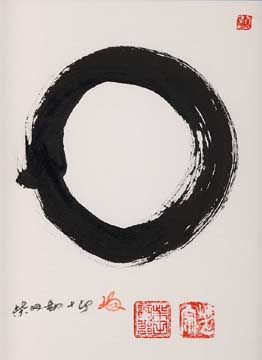 Not the answer you're looking for? Browse other questions tagged kanji literature or ask your own question.