What kind of Japanese "dialect" is this?

In a Japanese translation of exerpts of the Lotus Sutra, there is kanji which is used that is to varying degrees still used today. Some of them are relatively common in normal speech or writing, whereas others seem to me to be more stilted or only used in formal writing (e.g. 無量 as muryō). Other times, there was kanji used that is still commonly seen in writing, but when one says it, there is a different name for it (e.g. 力 is used in the text and is written in katakana as "りき", but I believe that nowadays, its said, "ちから").

What is the name of this dialect (if there is one) and is it just a temporal difference that caused this contrast- similarly to how Shakespeare sounds weird to English speakers in the modern day. And lastly, is there a way to learn more about this type of Japanese?

Here is a link to a webpage that has the translation written in romaji. I couldn't find one that had just the Japanese and kanji on it, so I just have a sample photo below: 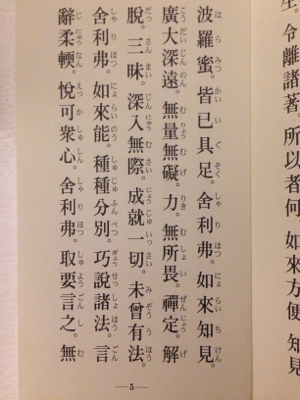 The origins of Buddhist sutra are compilicated, but they are generally based on the transliterated Sanskrit/Pali or their Chinese translations. See Lotus Satra on Wikipedia. Although they might have been more or less "Japanized" in terms of pronunciation, they are basically not Japanese. (Noticed all the characters in the page are read with on-yomi?) I believe no Japanese people talked in this way anywhere in the history. Some words such as 感無量 were "cherry-picked" into the ordinary Japanese vocabulary, though.

Today, all Japanese high school students learn basic 古文 (archaic Japanese), but they cannot understand the meaning of sutra because they look totally different. Personally, I can identify some words (三昧, 如来, 未曾有, ...) in the pasted page, but cannot get the meaning of the sentences at all.

If you want to seriously learn more about this language, perhaps you need to enter a university that has a Buddhism course. Or learning Chinese may help?

Yes, this is not Japanese at all. It's not even kanbun in the sense of "Chinese text read as if it were stilted Japanese." It is medieval Buddhist Chinese read character-by-character as Chinese but with a strong "Japanese accent."

Many Buddhist prayers and chants aren't really understood by most Japanese people (except perhaps monks and scholars). I've attended Buddhist temples and ceremonies in Japan and Taiwan and they use very similiar chants. In Japan, it's basically pseudo-Chinese (which resembles archaic onyomi but it's unclear if it was ever used in Japanese). They make the sounds (pronounced slowly syllable-by-syllable) following a prayer book. Often they do not understand the original meaning or significance of the Kanji and some books are entirely in hiragana. It's similar in some regards to reading songs or Christian prayers in Latin in western countries. It's not a local dialect at all, these are used at Buddhist ceremonies throughout Japan even today, including regions which have strong local accents and dialects.

Not the answer you're looking for? Browse other questions tagged kanji old-japanese .

2
Trouble with this sentence: 未曽有の被害をもたらした７月の西日本豪雨災害

17
About writing numbers using Japanese numerals vs using Arabic numerals
7
What is the proper term for the use of archaic kanji?
5
Japanese language "compression ratio"
15
How has Japanese kanji and kana usage changed since 1945?
16
Why do some Japanese people write parts of their name in hiragana?
9
Variations in the "same" kanji, how do you know which one to use?
2
Can someone help translate this gravestone?
1
Is there a Japanese translation for the Chinese term, 超级?