Question about the characters on Japanese Yen banknotes

Apologies in advance if this is not the best place for this question. Apologies also that I couldn't "tag" this question very well as I had to fight with the tagging system for 5 minutes before I could post this question with a tag that was not completely irrelevant :( If anyone is familiar with currency/banknote tracking, e.g. Where's George or EuroBillTracker, I am currently working to build one, I'm working on one of my own, for the Japanese Yen. Eventually I will make a "generic" version and post that free on GitHub so that anyone with PHP knowledge can make one for their own country/currency (instead of it being like currency tracking where every tracker organisation has to write their own tracker project code from scratch), but that's a long way off yet.

My question is about a symbol I've seen in some images of Yen banknotes, with particular reference to the serial number (which is key for bill tracking). If you look at this image from Wikipedia (although there are other examples of notes with the same character) here: https://en.wikipedia.org/wiki/Banknotes_of_the_Japanese_yen#/media/File:1000_yen_Natsume_Soseki.jpg

You see that the serial number of that bill is: ZP5494(something)4U

Where I wrote (something) in there, it is because I cannot understand what that symbol is. As I understand it, the currency nominally has the Roman alphabet and Indo-Arabic numerals, like Western currency, but this symbol looks to me to be an exception of some kind. It looks like a cross between a 2 and 9, or a 9 with a tail on its bottom, or something, but I have no idea what that is. Does anyone know what that might be or where I can find out?

, this is just an Arabic numeral 2. This font has been used since 1964, but current 10000 yen notes use a different font. This way of writing 2 is not popular in Japan, either, and even native Japanese speakers occasionally wonder what this is. This page says this unique font may be for preventing/detecting bill forgery.

By the way, if you're interested in tracking, note that the color of the number is also important: 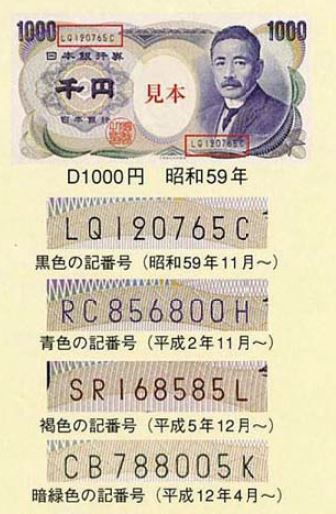 Not the answer you're looking for? Browse other questions tagged numbers or ask your own question.

17
About writing numbers using Japanese numerals vs using Arabic numerals
12
What do the question marks on these gas station signs mean?
4
Is there a logic behind the different endings when counting things in Japanese
9
Counters In Japanese
7
Confusion about 一千億 and 一千兆
8
Questions about counters
5
Mixed Fractions/Mixed Numerals in Japanese
0
The day of the month
0
Native or Sino Japanese numbers?