How do you write the sound "wu"?

As in "Wu Tang" or something similar. Would it be something like ウゥ? I know that "wool" is written as ウール, but 1) the "woo" sound is pronounced slightly differently than "wu", and 2) ウール doesn't give you the "pushed" sound of the 'w'.

And not just at the beginning of a word. Specifically, I was watching this video of a guy who goes by the name of "Swoozie", visiting Tokyo. How would he (or others) write that name?

As per Mr.Ito, "In loanwords, the former is usually transcribed as ウ and the latter ウー, as you know. "

Dono has a point in his comment where he mentions that even if there were a way to transcribe it, the sound [wu] does not exist in Japanese.

Let me first explain why it doesn't exist.

The Japanese phoneme /w/ as in /wa/,/wi/,/we/ and /wo/ (transcribed as ワ,ウィ,ウェ and ウォ) is not the same as the phoneme /w/ in English. /w/ in Japanese is the approximant (which is more or less like a non-syllabic vowel) corresponding to the vowel /u/, which in Japanese is pronounced with relaxed lips, whereas /w/ in English is pronounced with rounded lips. /wu/ is possible in English, since when going from the /w/ to the /u/, the lips lose some of the rounding. However, in Japanese, /wu/ doesn't make sense, since /w/ and /u/ are pronounced in the same way. Hence /wu/ = /u/ -> ウ.

Back to Dono's point. Japanese does have a way to transcribe /v/, namely with ヴ, although I would argue that /v/ doesn't exist in Japanese (or at least, it's usually realized the same way /b/ is). I think one reason that /v/ has a transcription whereas (English) /w/ doesn't could be that the concept of your upper teeth touching your lower lip is fairly easy to understand, even if that sound is not in your phonetic inventory. But the whole thing about rounding, that's a bit more complicated. Also, Japanese /w/ works as a good approximation of English /w/ except for the specific case of /wu/.

In japanese, it had a letter "wu", it´s ウ without the top line, i remember studying japanese and the wu was like that, and in the japanese keyboard language, if you put "wu" it just makes a U. Not sure why it does that.

You write it like this “于”. The hirigana form looks like a combination of “け” and “ほ”. 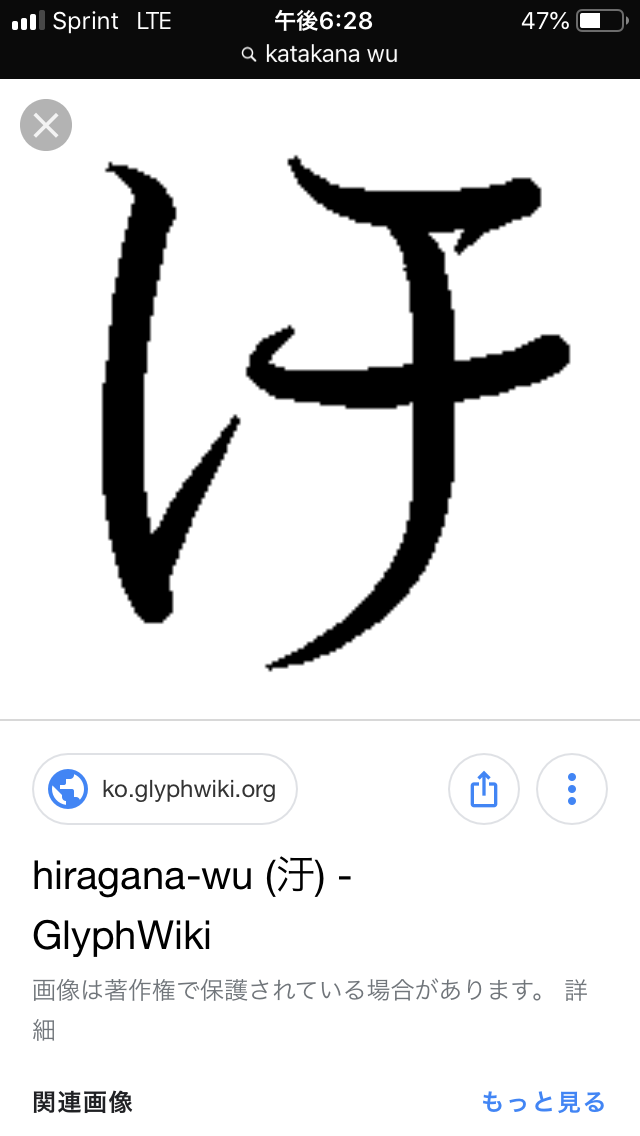 I wouldn’t use this on anything important though, because this letter is obsolete, if you want, you can use it for fun.

Not the answer you're looking for? Browse other questions tagged pronunciation katakana or ask your own question.

22
When did the "wu" character drop out of use?

18
Except for pitch, what are the differences in pronunciation between Kansaiben and Tokyoben?
8
R sound vs L sound
2
How would you write the name Anibal in Japanese?
3
How to write the name !xobile in Katakana?
7
Why does this store named サァラ have a small ァ in the name?
2
How do you write 縮めて in IPA?
5
Why are Japanese vowels occasionally rhotacised in songs?
14
Do Japanese actually pronounce the "v" sound?
6
Pronunciation of ん before a fricative