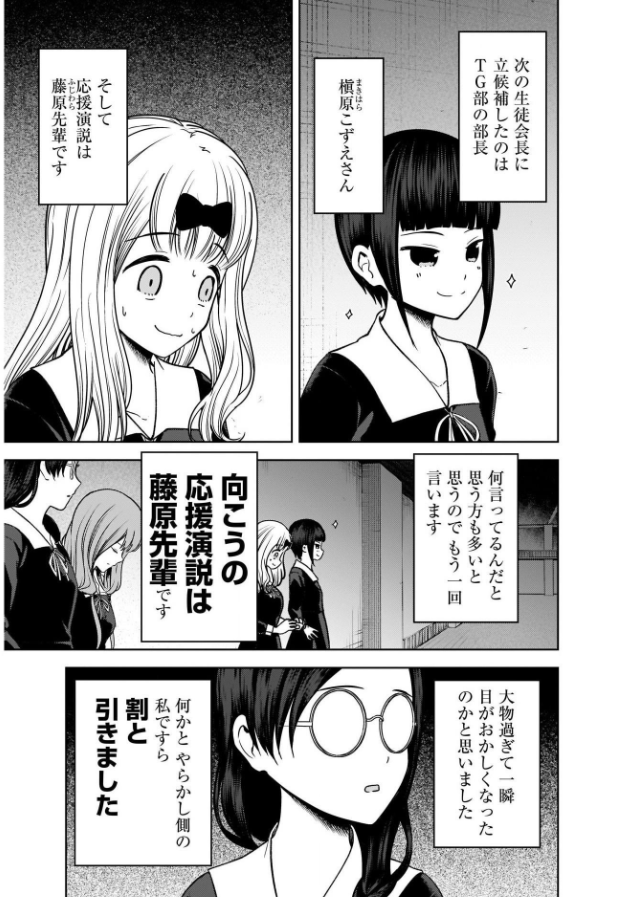 I don't understand what she meant by「何かとやらかし側の私ですら割と引きます」. I'm not sure about やらかし側, it means "bad side"? What about「割と引きます」? It means "relatively turned back" or something? What 引く means here?

やらかし側 is made up of やらかします and 側. やらかします is slang and means to do/do something by accident that other people don't want or shouldn't do.

So やらかし側 means she is a side of the people who does/does something by accident that other people don't want or shouldn't do. I don't know this character but is she a bit of a trouble maker/messes up sometime...?

Finally, 割と引きます is coming from two parts which are 割と and 引きます。 割と can be translated to "relatively" as you mentioned, but also it's an expression that expresses the degree of ambiguity, so you can translate as まあまあ/fairy.

引きます in this context is used as slang and means cringe.

So in summary, even for her, the fact 藤原先輩 is going to do 応援演説 makes her cringe.

I hope this would be helpful :)

0
Don't understand the situation in a shin chan comic strip
0
Two から in the same sentence
8
Understanding and translating 健気（けなげ）
2
Help with translation, 綺麗事 and 奴の方
1
可愛くないのはやだけど妙に気合い入れたと­思われるのも
2
What do いっぱいいっぱい and 余裕 mean in this context?
0
Interpreting the meaning/nuance of a conversation
3
Help understanding this line - usage of くれる
4
Understanding めちゃくちゃ and 内容 in this sentence
0
The meaning of 強くあろうと意識した in this context