Is there any word 'popular' in 'お嬢ちゃんも先生似だしいけるんじゃねーか ?'?

The context of this scene is that Shimoda is explaining to Itsuki how beautiful Itsuki's mom was and how many students were a fan of Itsuki's mom for both beauty and personality.

Given how much you resemble her, you're probably popular, too. 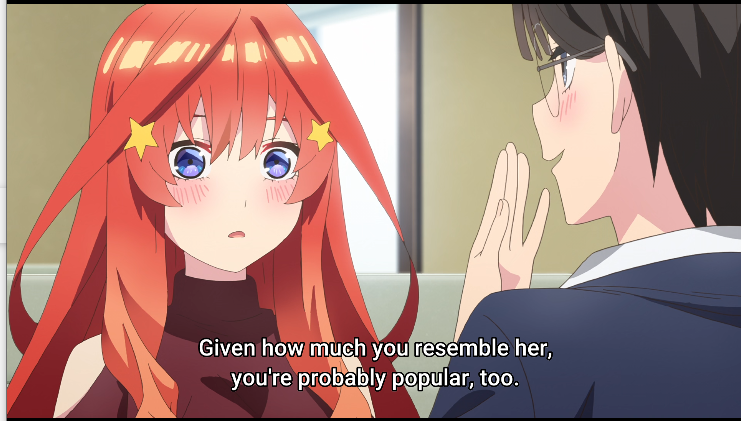 that seems to translate

Question: Is there technically no word 'popular' there (and then 'popular' is probably just used by the subtitle creators to refer to the scene immediately prior) ?

For some reason your translation directly connects じゃねーか to 先生似 and ignores everything in between. し here is a particle indicating the preceding clause is a reason, and いける is where the translation takes 'popular'. I can't seem to find a dictionary entry for it, but it would probably an entry under definition 1 here. This いける generally means something like 'to be cool', 'to be good looking', or 'to work well' out of could meanings that apply to this scene. Also んじゃないか is often less a tag question and more a statement of relative certainty.

10
Usage of ”し” particle
2
Popular: モテ vs 人気
0
The Quintessential Quintuplets (aka 五等分の花嫁) : Is 届くんです (it reaches) a mondegreen that should be 五等分です (It's divided into five equal parts)?

3
Is there any difference in meaning between 「抜け切る」 and 「抜ける」?
3
Baggu vs Kaban - Is there any difference
2
Is there any word for stars only?
0
Meaning of the word 水戸黄門. Is there a hidden nuance?
2
Popular: モテ vs 人気
0
The Quintessential Quintuplets: Complicated/complex/difficult: How different are 複雑 (fukuzatsu) and 大変 (taihen)?
0
Does まあ necessarily/usually have a romantic connotation? Or at least is まあ probably used romantically here?
1
The Quintessential Quintuplets: You can't address your parents chichi/haha, but can you refer to your parents as oyaji/otou-san/okaa-san?
0
Ghost/monster: オバケ vs おばけ but I don't see the emphasis