Note the following is based on web searches.

There was no fixed notation for ん.

A simple description is that up to Heian period (- late 12C) there were fluctuation in writing ん, which was expressed by ム/二/ウ/イ or just left out.

It is said these did not exist in native Japanese, and as such there was no notation for them in 万葉仮名.

Also note that even just 100 years ago 小書き文字 was not used: E.g., 帰った was written 帰つた although this is a matter of notation, not of existence of sounds.

Actually the Wikipedia article (at least the Japanese and English versions) does show voiceless and voiced consonants, though the distinction between them was not always clear-cut in the actual usage. Generally speaking,

were phonologically nonexistent in the times man'yōgana was used. Therefore, they have no consistent means to spell them. They have been slowly developed though the Middle Japanese period to be the features of today's Japanese.

By phonologically nonexistent I don't mean people never uttered such sounds at that time, but they were meaningless if heard, and incidental rather than intentional. For example, English thunder, unlike under or wonder, lacked d in the older form (thonre). But as people habitually articulate as if there is d between n and r, it finally gets fixated there. Today, many speakers pronounce chance as if chants, but dictionaries don't formally recognize the middle t. This is because people still don't intend to make the sound, for the time being. It just optionally exists as a side effect of English articulation.

As for voicedness, most man'yōgana literature does have good distinction, so you can use the chart below as recommended man'yōgana spelling. However, technically it just shows whether a syllable's modern reflection is voiced or not, and does not imply that independent voiced consonant existed at that time. 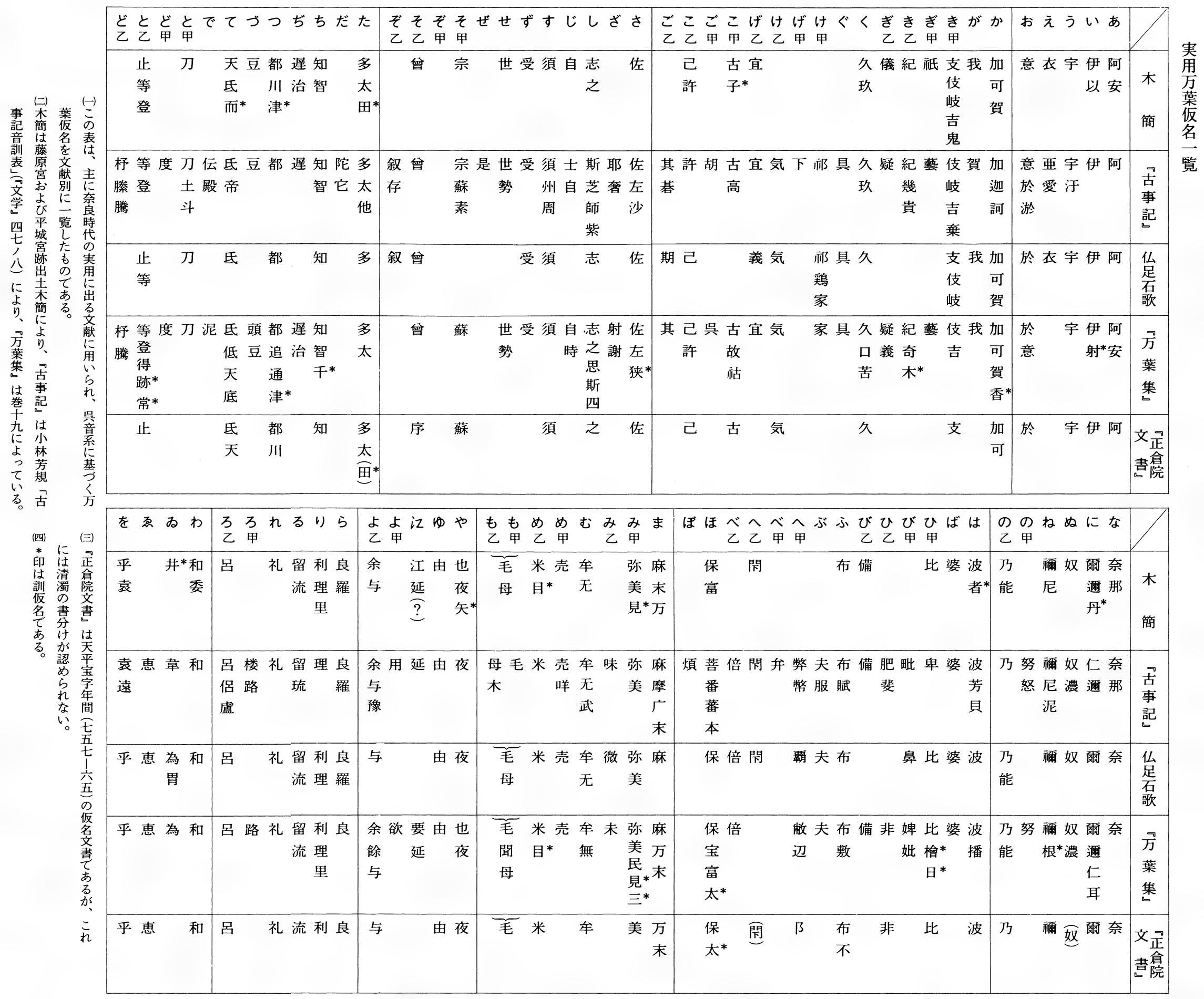 As you can see from the origin of most rendaku words, the voiced series of consonants derived from the contracted pronunciation taking the following path.

What man'yōgana tried to record is thought to be the second stage, or prenasalized syllables. This is why sometimes characters with nasal onset (我, 疑, 泥 etc.) are used to spell voiced syllables.

The moraic nasal (撥音) ん shares most of the history with the dangling nasal just explained above, so it has no consistent spelling, except characters for む was sometimes used in place of it. And っ (促音) is a (very arbitrary) abstraction of diverse geminations, conceptually completed no earlier than the 12th century, where its existence in man'yōgana is hard to imagine. They were often left out unspelled even when their (phonetic) existence is conjectured. Their statuses in Old Japanese could be compared to the modern English lil or li'l, which try to represent the glottalized pronunciation of little [[lɪʔl]], but without proper way to render, the [[ʔ]] is omitted or replaced by a vague placeholder.

Not the answer you're looking for? Browse other questions tagged kanji orthography manyōgana .

11
Is it possible to tell whether a word is kanji or hiragana without reading it?
7
Usage of kanji for words usually written in kana
4
Are 万葉仮名 (man'yōgana) chosen consistently?
1
Understanding hiragana-only texts in videogames
1
Conjugation of い adjectives - when do you conjugate them and difference between 新しい車 and 新車?
2
Which alphabet should I use when combining a Japanese word with an English word?
7
Academic/historic attempts to create an alternative writing system similar to Hangul?
1
Do the Japanese speak with On and Kun in daily conversation?
3
What constitutes as Kyūjitai Kanji?
3
Is it correct to split the reading あした of 明日 as 明（あ）日（した）?