Are browser tabs タブ counted as つ or 個?

Safari counts tabs as 個 even for small numbers like 5. I wonder, is this the accurate counter word for browser tabs? Or are tabs counted with generic つ that becomes 個 for numbers greater than 10, but the string interpolation can’t do Japanese numerals in its complexity?

In the natural language, spoken or just written by humans, would 五つのタブ or 5個のタブ be used? In the case of 個, what category does the browser tab fit so this counter word would be appropriate? 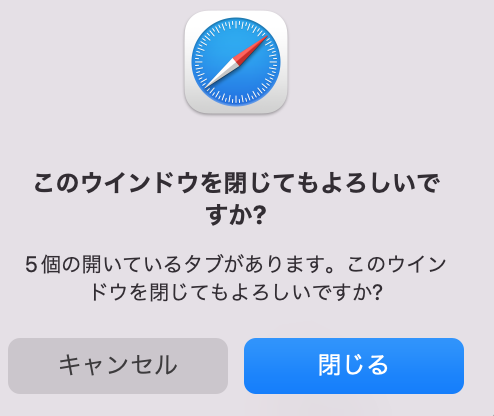 つ or 個 can be used mostly for anything, as explained e.g. by this answer. So both are fine for browser tabs.

Generally つ looks more colloquial, which may be a reason 個 is used in the message (as well as in most device messages). And of course, the simplicity of using 個 could be a factor.

The number of tabs are actually the reflection of your computer's memory state. They just so appear to show up as tabs on the screen. How to portray them to the end user is up to the designers. As you're talking about Safari, let's focus on how Apple renders their user interface.

Arguably they've been utilizing Skeuomorphism. Just look at their "Notes" app - they do a great job making it look/feel like an actual piece of paper. So what do they represent tabs to be? Here are some possible assumptions:

1. Tabs are wrappers around page(s)

2. Tabs are containers for page(s)

In this case, it's natural to say 1個.

Once Apple defines what tabs are supposed to portray, their localization team decides how they should be counted.

I have never counted tabs with my friends in my life, nor have I implemented such message for the Japanese. But I think 1個 or 1つ is appropriate. 1枚 sounds strange, probably because I think tabs are containers.

Or are tabs counted with generic つ that becomes 個 for numbers greater than 10, but the string interpolation can’t do Japanese numerals in its complexity?

I don't represent Apple, but they're probably capable of handling such case. So this shouldn't be the reason to avoid certain counters.

Not the answer you're looking for? Browse other questions tagged counters or ask your own question.

14
What counter words are used by animals for humans?
4
Are most counter words made up of two parts? What are those two parts called?
10
Why are movies/video-clips counted with 本?
4
How can I say "counted in (specific unit)"?
18
Are there native Japanese numbers greater than 10? What use are they?
13
Are Japanese counter words still being created?
1
Are counters for houses used in addresses?
1
Are Japanese counters the same when viewing items online?
5
How are fundoshi counted?
2
How can we figure out how counters are read with each number?