Need help with the meaning of this sentence [MC failed to catch a strange creature- half cat half bird like, then he said this]

MC is a detective in his school .He's trying to catch a strange creature ,that the student in his school are gossiping about.The school Public Moral Department is chasing this creature too like him , but they're like rivals competing with each other.

He tried to catch it (?) on the stair but failed and felt down. (it seems that he received infos about this creature from the student ,some say it's a dog ,some say it's a cat but he did not so sure about those theories- he also overheard a member of Public Moral Department said "I heard that it's a rabbit" -He thought that "It seems their infos about that creature are no different like mines" )

I can only guess he meant "Could it be the theory people (the student in his school) said that you're a bird was true ... !?" but i'm not sure .Much thanks if anyone can help me understand the correct meaning of what he said (there is a "....!?" missing part so I don't know what was he trying to say here too) 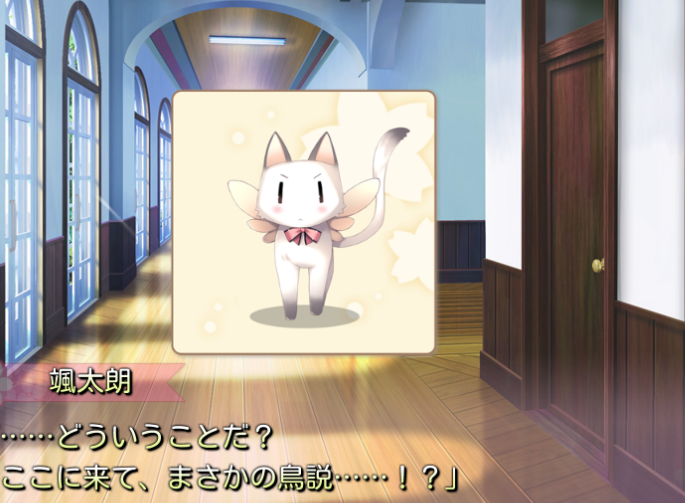 grammar meaning japanese-to-english
Share
Improve this question
edited May 5 at 20:22
casualreader
asked May 5 at 15:38

This 説 is a type of recurring humorous expression used in frivolous or otaku-ish speech in recent light novels and such. 説 is a grandiose word meaning "(public/academic) theory", but people sometimes abuse this word to say something as simple as "It could be that...".

For example, someone may say this in a light novel:

This is normally taken as a joke that simply means something like "Could it be that Taro is a girl (hehe)?". Without 説, this might sound like a genuine doubt. This of course does not mean some academic society is seriously investigating Taro's sex.

In your case, the creature basically appears to be a cat, but the guy just noticed it could fly. So he is saying "Now I'm starting to wonder if this is actually a bird..." or sometimes along those lines.

This type of 説 usually comes at the end of a sentence, so I don't think something is omitted.

This should be straightforward: something to the effect of "what kind of thing is that?"

As explained, this functions as a set phrase that could be translated "after all this". The literal meaning is something like "coming to here", i.e., arriving at this (metaphorical) point (in the discussion).

The grammar point here: this entire phrase is a relative clause that modifies 説 "theory". Literally we have a sentence fragment: "the theory that it's (omg, really?) a bird after all". The implied sentence continuation would be something about considering this theory.

As said in the other answer, it's a particularly affected way of expressing the ideal. I liken this 説 suffix to "consider the following:" (except that we are actually asked to consider the preceding, Japanese grammar being as it is).

Overuse of ellipses is common in manga, LNs, video game scripts and other such dramatic works for young adults. There aren't really any words being left out; it just suggests trailing off, or otherwise speaking the line with some unusual emphasis. (Sometimes this makes it into the translated versions, too.)

Not the answer you're looking for? Browse other questions tagged grammar meaning japanese-to-english .