What is the purpose of を in this sentence?

I'm playing through Ace Attorney's Japanese release to get reading experience, and decided to replay the first case, this time to focus on sentence structures.

Not long after progressing past the first testimony (where you prove the witness was wrong regarding the time at which the murder happened by a margin of 2 hours), the judge says this, in response to the prosecutor objecting that the witness simply made a trivial mistake:

The meaning of the sentence comes across as clear to me - roughly, "I can't agree with that. Yamano-san, what's the reason for you saying that you discovered the body at 2 P.M.?"

However, I don't understand why the judge uses that last を. Is there a reason why it wouldn't be "時間が２時" instead? It doesn't look like there's an omitted verb there, as the だと implies the Judge is just quoting.

I'm most certainly missing something. I would like to know what the last を does in this sentence and if it's an established use of the particle.

Based on A Dictionary of Intermediate Japanese Grammar, page 521, 思う can take を inside the quoted と clause: 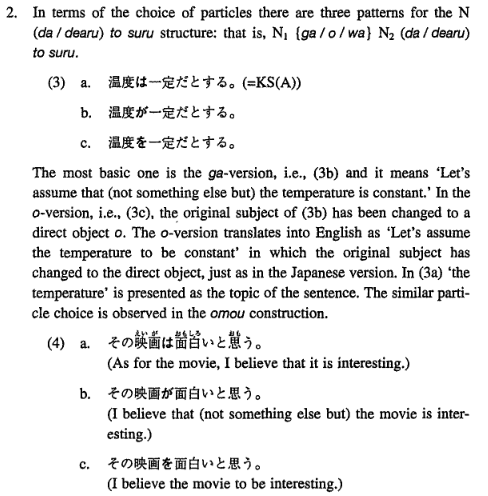 As the image explains, the を version here translates to:

What's the reason for you saying that the time you discovered the body to be 2 pm?

There is a hidden AをBと思う construction in the last part of the sentence. 思う can be other verbs listed here instead.

どうして、死体を見つけた時間を２時だと[思うのですか]？
Why do you think it was 2:00 that (you/they) found the body?

Not the answer you're looking for? Browse other questions tagged grammar particle-を .