Are hiragana characters related based on construction?

I've noticed that certain hiragan characters are written in the same way. For example one could look at „ÅÆ „ÇÅ „ÅÇ „Å¨ as progressions on a similar theme. If I could put it crudely, we have swoop, line+swoop, line+cross+swoop, line+swoop+loop.

These may just be visual consequences of a limited number of paint strokes but I'm hoping there is some relationship here. I certainly don't see a phonetic connection.

Folks I realize that some of you have taken my question to mean that I'm expecting the kana to be decomposed into different semantic elements. I know that they have individually evolved from different kanji, but they have simplified into forms that are very similar. I saw another question where someone responded along the same lines saying that t is not l with another line and b is not L+o, etc. but they are groups of letters in the Latin alphabet that are written in similar ways and students who are learning the characters do practice them in groups. For example, n, m, u, r, and h are practiced together because of a similar structure. Morever, the elements of the characters do have names. The dot on the i and j is called a jot. The cross on the t is a title.

Getting back to my question, are there terms used in Japanese to teach the very similar characters? Maybe elements of the character that are used? I'm imagining some 6 year old being told by his teacher to make all the swoops the same in „ÅÆ „ÇÅ „ÅÇ and „Å¨. I say swoops because I don't have a better name for what this might be. Or the Z shapes in „Çå, „Çè, and „Å≠. Surely there are grade school workbooks where they teach the young students to draw those zig zags in the same way on all three characters.

Thanks to the comments thread, I now have a clearer idea of what the poster was looking for in specific. :)

According to the Japanese Wikipedia article for Á≠ÜÁîª„Äê„Å≤„Å£„Åã„Åè„Äë ("stroke [single stroke of a writing implement when writing any character]"), the following are the basic graphical components that make up any kanji. 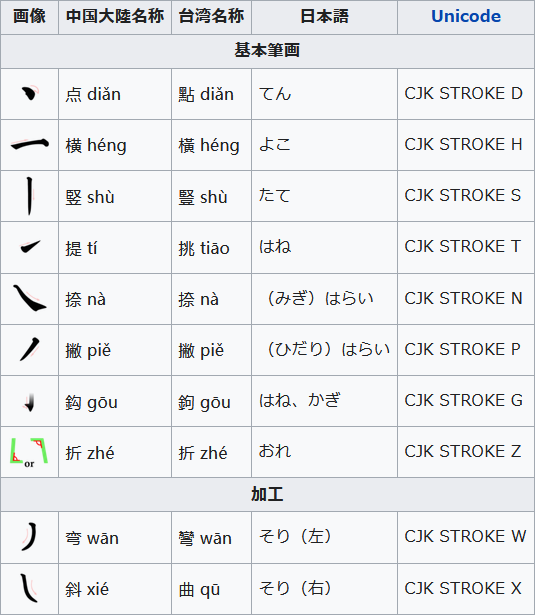 Again, the strokes above are the basic ones used in kanji, and there are some stroke varieties specific to kana that are not listed here.

Just below the table on the Wikipedia page, the text mentions the „É´„Éº„Éó ("loop") stroke for certain special kanji, and I suspect that this word might also apply to the loops on the bottoms of certain kana, such as „Çà or „ÅØ.

I am uncertain of the terminology for other graphical components, such as the bend-y bit that's almost a loop in „ÇÑ or „ÇÇ, or the big less-circular loop with cross-strokes going through it in „ÅÇ, „ÇÅ, or „Å¨. If anyone can provide the names for these elements, I would be happy to update this post.

Not the answer you're looking for? Browse other questions tagged hiragana .

3
Does an international OR standardized phonetic alphabet/notation system exist to depict all the Hiragana/Katakana sounds?
16
Are there words which consist of katakana and hiragana letters together?
10
Font used to create handwriting worksheets by primary teachers to teach Hiragana
2
Are hiragana letters written with their small nuances?
28
Is „Åæ (ma) related to „Åª (ho) or „ÅØ (ha) related to „Çà (yo)? What does adding a bar to the left mean?
1
What methods are used to teach hiragana and katakana to 6 year olds?
2
Patterns across Hiragana consonants?