Understanding how macrons work in romaji

I understand how it works for Ohayō the o here is omitting the u from う, so without the macron it would be "ohayou". Even Tōkyō becomes Toukyou. But what about other vowels? such as ī ē ā ū what are these characters shortening or omitting?

It depends on the romanization system which your writing or the words you encounter are based on. In nihon shiki and kunrei shiki, for example, the macron is not used and in its place a circumflex appears above the vowel letter. Among the major romanization systems of the Japanese language, you only see macrons used in Hepburn.

The Wikipedia page on Hepburn is pretty clear and detailed and hard to improve upon, so I will just borrow the information from the relevant section:

In Hepburn, vowel combinations that form a long sound are usually indicated with a macron ( ¯ ). Other adjacent vowels, such as those separated by a morpheme boundary, are written separately: 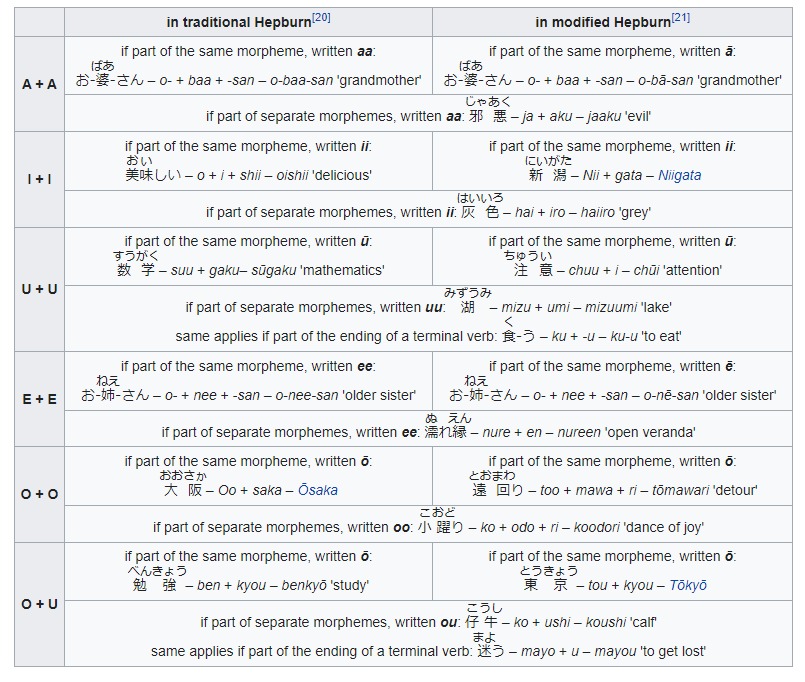 There are many variations on the Hepburn system for indicating long vowels with a macron. For example, 東京 (とうきょう) is properly romanized as Tōkyō, but can also be written as:

Not the answer you're looking for? Browse other questions tagged rōmaji long-vowels romanization or ask your own question.

5
What does this person mean by "doryo" in this context?
6
Why is "boyfriend" transliterated as 「ボーイフレンド 」 instead of 「ボイフレンド」?
6
How would one go about romanizing Aynu Itak?
9
Why is D written as Đ in Japanese handwriting?
2
Why is じどうしゃ (jidoushiya), jidōsha instead?
4
Is it possible to algorithmically convert Japanese text to Romaji?
3
Do native speakers learn consonant and vowel length easily, or is it difficult?
0
Translation of words like マサラタウン
4
Romaji for long vowel: 通り vs 東リ
1
Pronunciation of long o (e.g. in Street Fighter)—"oo" or "ou"?