I'm a bit confused about the ます form for る(u), I assumed it's just the [stem form]+ます。

What's the rule deciding which ます form is it? Is the stem form of いらっしゃる also just いらっしゃい?

The simple answer is that いらっしゃる is an irregular verb, so treating it as a regular verb (which is obviously the right thing to do without other knowledge!) leads to your totally natural confusion. Your thought that ます-form is just the [stem form]+ます is correct, it's just that いらっしゃる's stem-form is irregularly いらっしゃい.

To be more specific, いらっしゃる is one of the five polite "ある special class" verbs:

These all behave in the same way: the る does not turn into り/れ for ます-stem (aka continuative form, 連用形) / imperative stem (aka 命令形) respectively, but rather い for both the same. This pattern is seen with/"explains" how we get ください as an imperative form of くださる.

The verb 召し上がる (meshiagaru) is a regular verb. To be precise, an u-dropping verb, also called u verbs. They're called u-dropping verbs because the first step to conjugate such verbs require you to drop the syllable u (meshiagar) and add something else. In this case, います.

Now, why います and not just ます? That's the pattern for u-dropping verbs that end in る. Nothing fancy: if its an u-dropping verb and it ends in る, drop u and add います to conjugate the verb to masu form.

Another way to look at this, as you've pointed out, just add ます to the stem form, also called pre-masu form. However, you would need to know the stem of the verb in advance.

The verb いらっしゃる (irassharu) is an irregular verb and, as I said, there's no pattern at all, like in english you have the verb sing, whose past form is sang instead of "singed". You just have to learn them off by heart! In short, there's no rule for you to follow.

Here's a table which exemplifies the conjugation patterns for regular verbs: 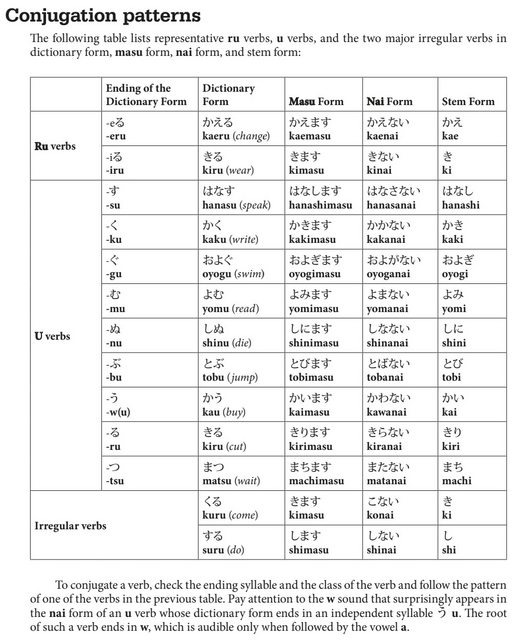 3
Unusual usage of 勝 （勝たしてくれ？）
4
How to convert verbs from polite form to dictionary form?
1
"Masu" verb form vs "Imperfective" verb form
1
遊びます vs 遊べます - 'be' meaning "you can"?
6
What's the rule for expressing "I don't want to"
1
Dictionary form of verb as nouns
0
Linking two verbs --> 送り始める