I am wondering if the ku/katta conjugation for i adjectives has (had) a meaning by itself.

For example tanoshii becomes tanoshiku. In the past tense then tanoshikatta. Clearly the tta is the indicator for the past tense. So my question is: is or was the ku/katta for i adjectives a verb ? Where does it come from ? And what is its meaning (beside the one learned in textbooks). My japanese teacher also wondered but she mentioned that ka, ki, ku, ke, ko were used in old japanese to indicate past or so. I have heard once that i adjectives have the desu/da already built in so maybe ku/katta is some variation of da/datta?

Japanese-as-a-second-language learners generally remember 楽しかった and so on as a form of 楽しい. However, in the "traditional" Japanese grammar, た/だ is indeed a standalone word categorized as a 助動詞 (auxiliary verb).

So yes, た in 見た, た in 簡単だった, and た in 楽しかった are exactly the same 助動詞 for the past tense. For example, this is the entry for た in a monolingual dictionary, and it clearly says it's an auxiliary verb that signifies the past tense.

く and かっ are considered as part of the "true" conjugation forms of i-adjectives (namely 連用形). They are not regarded as a word, and they don't have any intrinsic meaning on their own. The following table is the conjugation chart of i-adjectives described in Japanese Wikipedia. 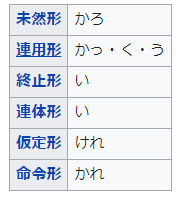 The origin of -く is indeed tricky, since as naruto mentioned in the comment it is attested from antiquity.

According to Frellesvig, B. (2010). A history of the Japanese language. Cambridge: Cambridge University Press.

we interpret these formants as forms of a restricted copula ('adjectival copula') and gloss examples accordingly, e.g. samu-ku cold-ACOP.INF 'coldly'. This interpretation of the formants attaching to the adjective stem finds further support in its relations to some other grammatical forms

and considers the resemblance of the adjectival copula to the past tense auxiliaries ("ki ... used in old japanese to indicate past or so") in your question.

As for -katta, it is more straightforward.

It may not be historically (i.e. diachronically) accurate to say that 楽しく and あった contracted to form 楽しかった, since the form あった is attested much later than the phonologically fused form たのしかr-. However, just like it is perfectly acceptable to say that the word "ability" is from "able" + "-ty" (rather than tracing it all back to Latin words habilis and habilitās), the synchronic analysis of 楽しかった as 楽しく + あった is a perfectly valid one.

For completeness, other analyses of forms historically related to the existential verb ある include:

Most of these forms are now quite dated though.

22
How does -ki form of i-adjectives work? (e.g. 愛しき)
10
Auxiliary verbs in Japanese
4
Why Japanese verb has so many forms?
3
Do I have a good grasp on the basics of what the continuative form is?
3
What is the ki used for in this sentence? 懐かし き 故郷
3
Please help me understand this たる?