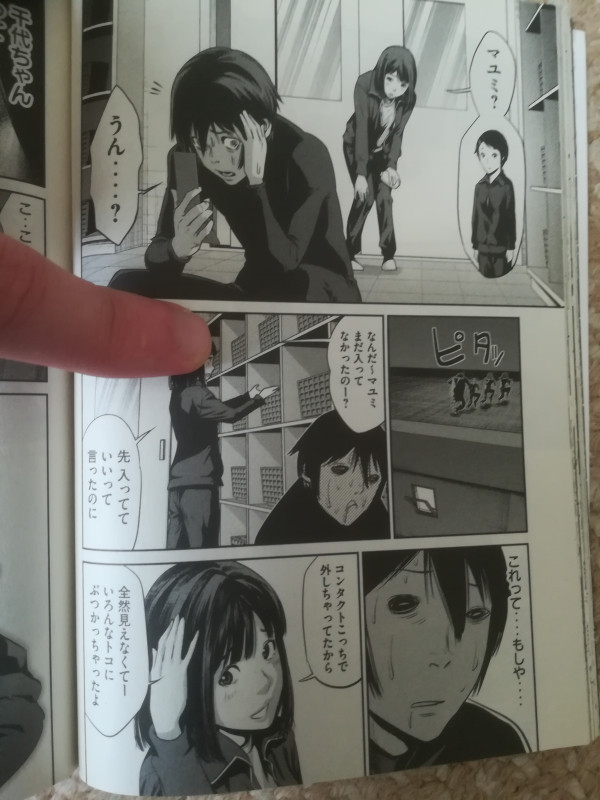 For quick background information, the girl Chiyo was supposed to take a shower with her friend Mayumi but forgot her shampoo, so she went back out while she told Mayumi to go in ahead. In the meantime the guy pictured snuck in looking for something. This scene picks up right after Chiyo returns with the shampoo in her hand, with the guy thinking he got caught red-handed. Chiyo is mistaking him for her friend Mayumi and as it turns out on the next page, Chiyo is incredibly near-sighted (ド近眼) and the story goes on a little with her not noticing the guy is indeed not her friend until Mayumi actually shows up herself.

Putting all of that aside, my concern is regarding the line 「コンタクトこっちで外しちゃっていたから・・・」. To be more precise, 外しちゃっていた (and maybe こっちで, depending on whether I interpreted it correctly or not). Not giving it much thought, my first interpretation would have been simply

I didn't have my contacts in and since I couldn't see at all, I bumped into all kinds of stuff.

Now my first issue here is the こっちで. Does this refer to the place itself, that is "here", just like if I were to say ここで? Or is it used like in the sentence 「そっちでは手伝う時間がなさそうだからこっちで何とかしますよ」refering to the speaker themself?

Now to the meat of the issue: Why is the form ～ていた used here? As far as I'm aware, she still doesn't have her contacts in (or else she would spot the guy sooner or later) so shouldn't it be 外しちゃっている? I thought that the ている form here with the verb 外す would imply the state of not having in contacts anymore; she took out her contacts before this scene is taking place and is now not wearing them, just like if I were to say 今はメガネをかけてない. Why is it in the past then? I thought that maybe it's to put more focus on the fact that while being out without her contacts, she bumped into all kinds of things? The state does extend to the present though, so I'm not entirely sure.

Similarly I found what I believe to be a similar example (I have no idea what this is from, just a random example from Google):

I hope the question is clear enough. Please ask if there's something you don't understand and as always huge thanks in advance for every bit of help!

外していた refers to continuation of state up until some time point in the past. See the picture in this answer. This form corresponds to past perfect aspect in English.

In this context, 外しちゃってたから describes the reason why she bumped into many things outside this room, which is an event in the past. Whether she is wearing contacts now is not relevant to this past event, so 外しちゃってたから is more natural than 外しちゃってるから. (She is still not wearing contacts now, but that is not her concern at this moment, because she believes she is safe now.)

こっちで is just "here". It simply refers to this changing room.

7
Is 寝る a stative or active verb?

9
Function of から in this conversation
2
How to translate a sentence that has no particles
8
About は particle and the 'contrast' it implies
4
Abbreviation and meaning of 「よか」?
4
Meaning of ～ことは～ようか
0
Help understanding some corrections on my sentences made using あげる、くれる, もらう
3
Who is Lonely in this Passage?