There's this scene in this LN where the main character unexpectedly accepted an invitation to a karaoke, and when questioned about it, the character responded by saying:

Then one character from the rest of the group responded by saying:

I'm not sure as to what "高校生か死神っぽい動機" is supposed to mean

My first guess is that it is something like:

With the clause in the square brackets being applied to the っぽい.

As in a motive that can either be high school student-ish or grim reaper-ish. But it seems kind of like a stretch.

grammar expressions
Share
Improve this question
asked May 28 '21 at 14:34

what thewhat the
28711 silver badge55 bronze badges
Add a comment  |

Your grammatical interpretation is fine. It's just "a (typical) high-school-student- or or grim-reaper-ish motive". This 死神っぽい動機 is almost certainly a reference to this famous 死神, who interfered with humans because he was "bored". 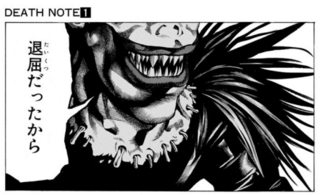 Not the answer you're looking for? Browse other questions tagged grammar expressions or ask your own question.