According to Wikipedia (and some posters here), Kagoshima Japanese resists the じ・ぢ and ず・づ mergers, much in the same way that various English dialects retain differences between words like meet and meat: 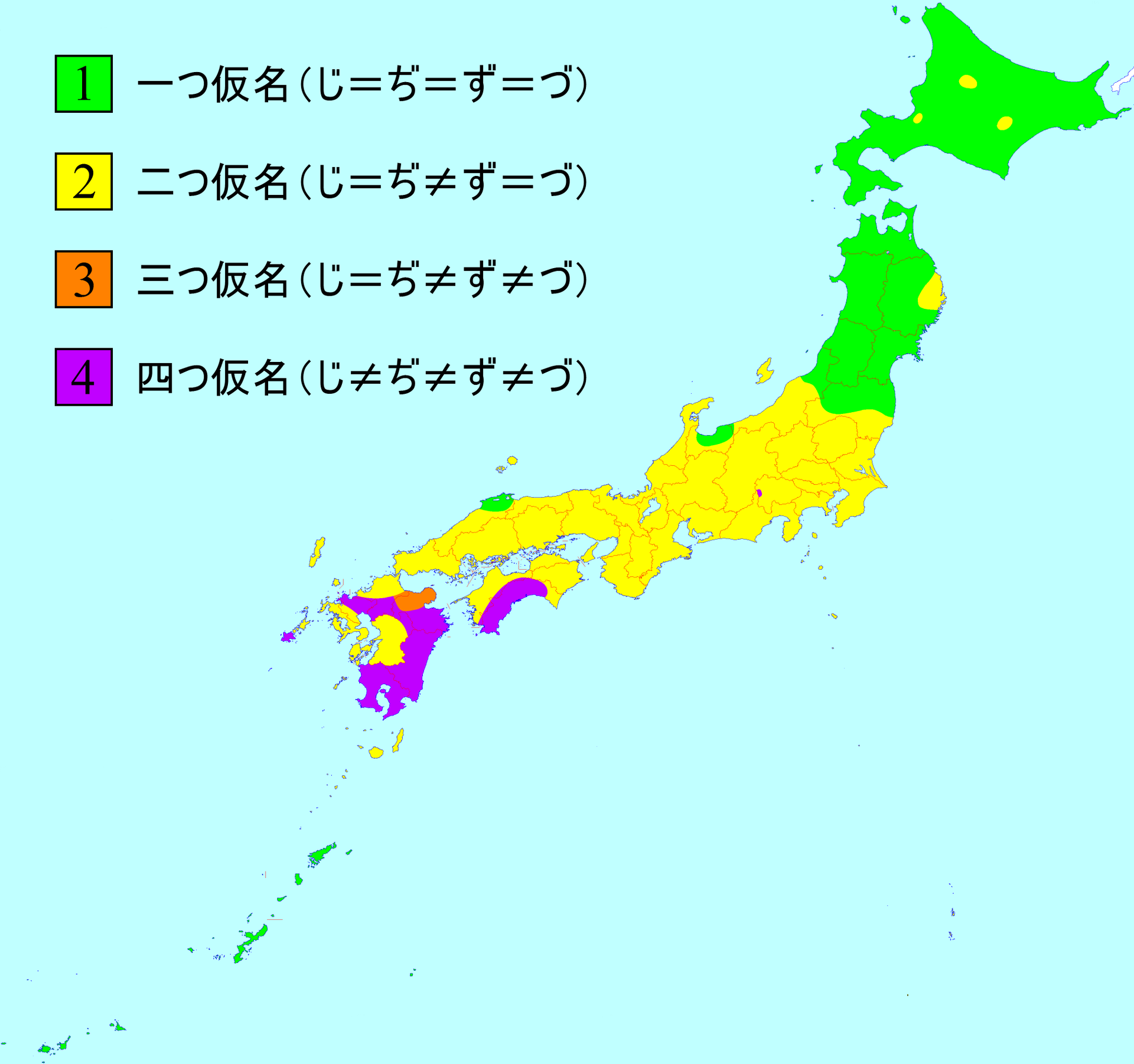 But the gendai kanadzukai (or rather kanazukai) has flattened out the orthographical distinctions between these kana. Is this just a "sucks to speak a nonstandard dialect!" sort of situation? I believe I remember reading in a different Wikipedia article (although I can't find it now) that said that ぢ and づ were "not completely obsolete" because of the Kagoshima dialect. Do Kagoshima speakers, when writing in their own vernacular, still use the ぢ- and づ-based spellings of words that they pronounce differently?

Also... what's that little speck of purple on the edge of Yamanashi?

Many moons ago, I taught English to first-year college students at a school in Tochigi Prefecture. One student had come up from somewhere in Kyūshū, although I forget exactly where. His name was 小島【こじま】. I called him こじまさん using the generally-Kantō pronunciation of じ, starting with a consonant something like [[dʑ]] (not too far from an English ⟨j⟩, with more of a stop sound initially), and he was insistent that the consonant in じ was pronounced more like [[ʑ]] or [[ʒ]] without the initial stop (technically, the voiced alveolo-palatal fricative, which doesn't exist in most varieties of English; or the voiced post-alveolar fricative, as in the pronunciation of the letter ⟨s⟩ in the words leisure or collision). He wrote his name in kana on the blackboard (since we were already standing there) and emphasized that it's spelled with a じ.

While not conclusive, I think this is strongly suggestive that, for this one person at least, the spellings and pronunciations are both distinct for those who distinguish the 四つ仮名 pronunciations in speech.

0
た ち つ て と -> だ ぢ づ で ど (ta chi tsu te to -> da dji dzu de do) - Why is it different from all the other kana that can get dakuten?
4
Why do not all かな get dakuten? And why only the は ひ ふ へ ほ へ kana get handakuten?
5
How is writing with 旧字体 over 新字体, using lots of 表外漢字 and using 漢字 in place of かな in a word that is almost always written with かな perceived?
3
To when, and where, did 合拗音 still have a notable presence in Japan, and are there any dialects, however minor, that still preserve the 合拗音 today?