Going by the information from kanji.jitenon, I have a question regarding the radicals 飠 and 𩙿. I've noticed that some Kanji seem to be used with either of these while others are displayed exclusively with the latter of the two.

Let's take for example 飴. In digital texts 飴 seems to default to the radical 𩙿, but if you check out the Kanji written in 教科書体 on the website (on the left hand side below the Kanji displayed in big, you can switch the font with the buttons), 飠 is used. The same goes for 蝕 and 餡. On the other hand, there are Kanji that seem to be written only with 𩙿, e.g. in 餌 or 饗 (in both 明朝体 and 教科書体).

I'm not sure what the system here is. Are all instances of 𩙿 interchangeable with 飠 or are there certain Kanji that use exclusively the former? What is the history behind these two?

According to the official 常用漢字表, the difference between components 飠 and 𩙿 is that of handwriting and printing standard. It is reiterated in the document that such two shapes are equivalent, along with the list of many other ignorable stroke-level and component-level variants.

The printing standard glyphs in Japanese are basically following the style of the Kangxi Dictionary, the most complete character dictionary until the modern age. As the imperial dictionary of high prestige, it renders head-characters in pedantic and (pseudo-)archaic forms which had not necessarily been practiced in the actual world. However, it was commonly referenced by early moveable type designers, and thus still remain prescriptive in Japan.

But typefaces like 楷書体 and 教科書体 (and/or 学参書体) usually replicate the handwriting style, because the former is by definition, and the latter designed for classroom i.e. teaching children how to write kanji.

響 vs 饗 is actually unrelated to the 飠 vs 𩙿 matter either etymologically or historically. In the original Japanese kanji simplification scheme (新字体), the shape seen in 郷/既/即 was introduced to replace the traditional counterpart in 鄕/既/卽. However, the simplified list only defined a limited number of kanji, those roughly in today's 常用漢字表 have the 響-like shape as the norm even in printing, while others the 饗-like shape. For details, see this post.

As others have noted, this appears to be part of the Unicode Han-character unification, where minor differences between character forms were ignored when assigning code points to individual glyphs during the process of setting up the Unicode specification for the Han characters. Since a single code point was assigned for multiple character forms, they called this "unifying". When a language code is explicitly specified in the HTML, and if you have the right fonts installed, your browser should pick the respective form preferred for each language.

Here's an example when viewed in my browser with my particular setup. 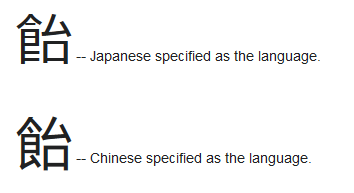 And here's the corresponding HTML.

Unfortunately, the Stack Exchange back-end doesn't allow this same HTML to render correctly here. Here it is just pasted in and rendered by the site and browser:

飴 -- Japanese specified as the language.

飴 -- Chinese specified as the language.

Broadly, I can say that I've personally seen handwritten Japanese where the radical appears to be the Chinese variant. That said, I don't know how strictly "correct" this would be considered, so before using this yourself, please consult with someone who grew up in Japan and went through the Japanese education system.

12
How do I look up this kanji?
1
Kanji radicals: Question to the radical assignment in dictionaries
2
How do you decide the alias of the radical for kanjis such as "字" and "旧"?
9
Variations in the "same" kanji, how do you know which one to use?
1
To describe how to write a kanji, is it more useful to say the radical first, or the base kanji?
0
Help with kanji recognition
3
Is "爿" a 略字--if so, how is it pronounced/written normally?
9
Why are Japanese fonts different to Chinese?
5
Relationship between radicals, components, kanji and words