Questions about punctuation in a light novel

I have the first time of No game No life in Japanese. However, there are some things that puzzled me quite a bit about the punctuation. As you can see in the photo, I don't understand the reason why some words are in square brackets (which I have circled in yellow). Also, I don't really see the usefulness of the black dots that are to the right of kanji and kana (indicated by a red arrow). 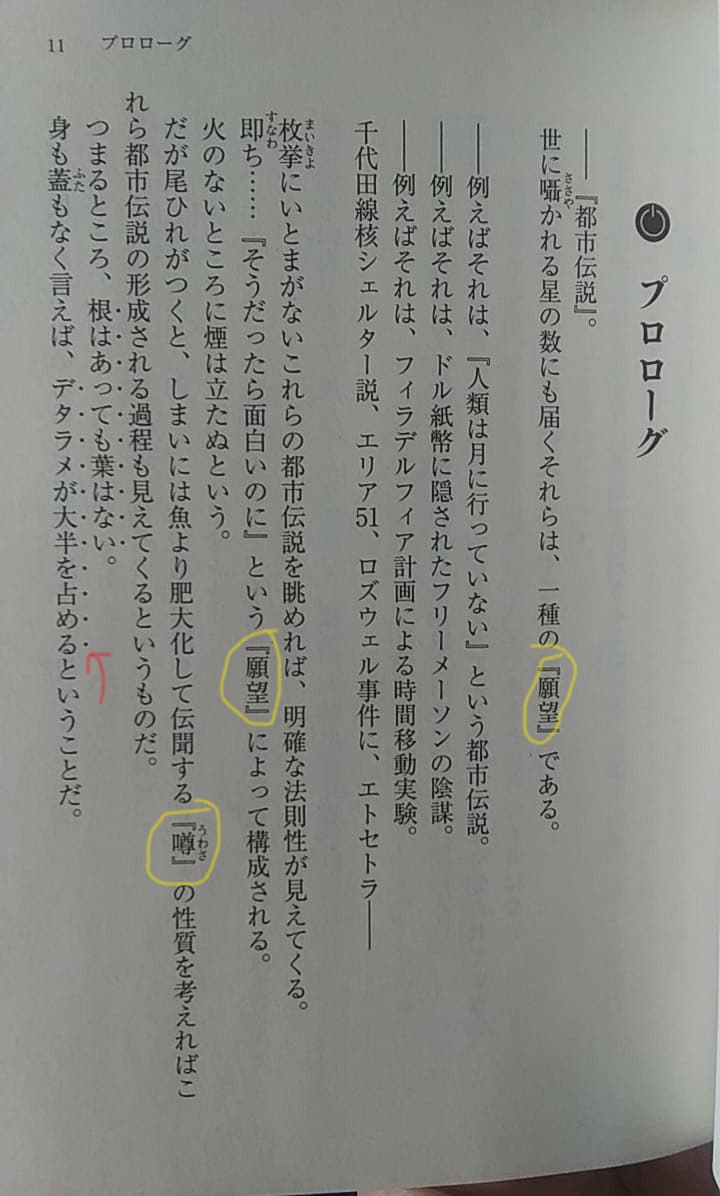 Both methods are for emphasizing something, but they are used a little differently.

Brackets are used to emphasize important keywords and words with non-standard meanings. Their role partly overlaps scare quotes in English, but Japanese people tend to use them extensively just for highlighting words (example 1, example 2). In light novels, you'll notice magic spells and skill names are commonly enclosed in them, too. Various types of brackets are used according to the writer's preference (eg 「」, 『』, 【】, 《》), and there is usually no significant difference. They're used really often, so you'll get used to them soon. In this case, the words 願望/噂 may or may not have some special meaning in the story. You'll see as you read on and understand his writing style.

On the other hand, those dots are technically called [圏点]{けんてん}, and they mark something important in the story. Their role is pretty much the same as italics or bolding (or sometimes all-caps) in English. Sometimes it works as a foreshadowing, so you may want to read and think twice. Less commonly, they are also used to highlight an uncommon kana word (e.g. dialect) to reduce misreading.

Not the answer you're looking for? Browse other questions tagged syntax punctuation emphasis .

30
Why are points used where furigana would be normally?
7
「」 don't seem to be 'quotation marks' in news article titles, what do they mean?
2
Japanese quotation marks

2
What is this dash-like punctuation mark?
3
Some questions about って
5
Is there any Japanese language reason why Google Maps hyphenates some names and not others?
0
Grammar of this sentence
5
Punctuation troubles in fiction
10
What is the Japanese equivalent of English editorial brackets?
1
Addressing someone without punctuation?
1
Correct punctuation when specifying translations