Want to improve this question? Update the question so it's on-topic for Japanese Language Stack Exchange.

I often run into kanji that I don't recognize and need some way to translate them into kana, so that I'm able to look up the meaning.

What's the most useful utility (in any form, web-based, application, iPhone program, etc) for performing this task? Something where I can draw in the kanji and have it identify it from that is probably best.

There are dozens of methods and approaches. Some you might have heard of are "Bushu radical decomposition", "SKIP", stroke-reading (as you directly copy the kanji).

http://jisho.org/kanji/radicals/ is a pretty handy method if you're decent at decomposing kanji into radicals.

If you have a Nintendo DS then 漢字そのまま楽引辞典 (Kanji Sonomama Rakubiki Jiten) is a great tool. It accepts kanji and kana entry via the touchscreen, and includes a JP->EN dictionary, a EN->JP dictionary, and a JP->JP dictionary.

The first thing you need is a little knowledge about the radicals. If you can break a kanji down into it's radicals, you can look it up in books and electronic dictionaries. It makes it easier to understand the kanji too, since you can identify its parts. If you can name a few of them, you can often type the names into an electronic dictionary to filter choices. Here's a couple of places to learn:

Names of many radicals: http://japanese.about.com/library/weekly/aa070101a.htm

A dictionary lookup with radicals: http://jisho.org/kanji/radicals/

The next thing you need is to know about stroke order. Learn the general rules, like write left-to-right, and how a horizontal, then vertical stroke count as one (like in 口, which has 3 strokes, not 4). You can learn most of these rules by learning the first 30 or so basic kanji.

With these two things, you're ready to look up kanji in a book, but it is tedious doing it that way. Instead of this, find a touch-screen device and get some software for it. Nintendo makes a good dictionary for DS, and iPhones or iPads work well.

With iPhones, iPads (and even the touchpad on a newer MacBook) you can write in Chinese characters, but they still don't have support for Japanese kanji. Plenty of the Chinese characters are the same as Japanese kanji, but there are enough differences to make you confused. Find an app with a custom input method instead. I use Daijirin to write in kanji, and it has a custom input method. After I find it, I either search in that app, or copy and paste into another app.

One tool for identify kanji is SKIP Codes, which were developed by Jack Halpern for his kanji dictionary. It works even if you don't quite know kanji radicals, much less the primary radical in a kanji.

basic-japanese.com has some information about how to determine the skip code for a kanji.From there you need a dictionary that understands skip codes.

Kanjidic includes SKIP codes and is free. You can search it for example here.

Japanese.app for iPhones is one such tool with a good UI that makes skip codes easy to use: 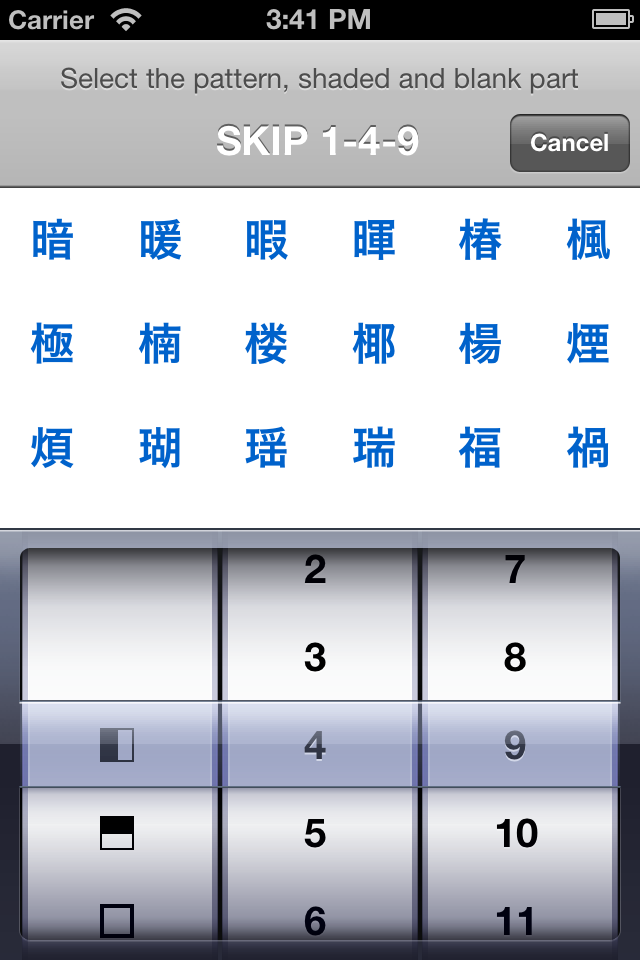 There's also the iPhone Chinese handwriting keyboard for trying to reproduce the kanji directly, but I've had limited success with that since Japanese is neither Traditional nor Simplified Chinese.

Not the answer you're looking for? Browse other questions tagged kanji resources writing-identification or ask your own question.

6
How can you input and display a radical in a computer text document?
2
What is a good series of books/programs to start learning from, if any?