Don't know the meaning of these complex kanji [closed]

Ask Question
Asked 3 months ago
Active 3 months ago
Viewed 93 times
0
Closed. This question is off-topic. It is not currently accepting answers.

Want to improve this question? Update the question so it's on-topic for Japanese Language Stack Exchange.

Seeking for help. Don't know the meaning of those kanji (big white, in the top right corner and in the lower right corner. Any help will be appreciated! Thank you in advance. 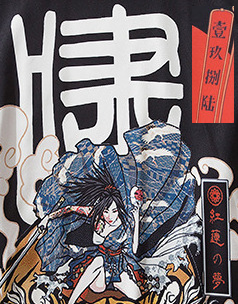 I tried to look for the surrounding text, but all I got were Taiwanese/Chinese sources.

In the end I managed to find out that the big white character (which is for the most part obstructed by the illustration) is「嘯」and it seems to exist in Japanese according to kanji.jitenon.jp and jisho.org. Both seem to agree that it means to roar.

The bottom red text reads「紅蓮{ぐれん}の夢{ゆめ}」but I'm not sure what it translates to. 紅蓮 means bright red whereas 夢 means dream or dreams.

The top red text reads "1986" using financial numerals in Simplified Chinese as dROOOze pointed out in the comments.

7
Why don't radicals have the same definition for all kanji?
1
Intuitive or logical way to know when to use a kanji spelling vs hiragana spelling?
3
Usage of Heisig radical “big”
3
Trying to decipher a Kanji on a bad image source
1
Any help recognising a handwritten kanji?