Is the か explained in the image below a "normal" question marker, like the one I learned when studying basic Japanese, or does it have some special properties?

This is from the TRY textbook for JLPT N1, so it makes me think this か is somehow different from the basic か used for making questions.

From what I can see in the mini-explanation, it transmits denial（否定）, but I can't appreciate that in the example sentences.

Could you please explain this か to me?

Thank you so much in advance!

By the way, do you know where I could see all the TRY N1 grammar patterns translated into English? Sorry for the extra question. 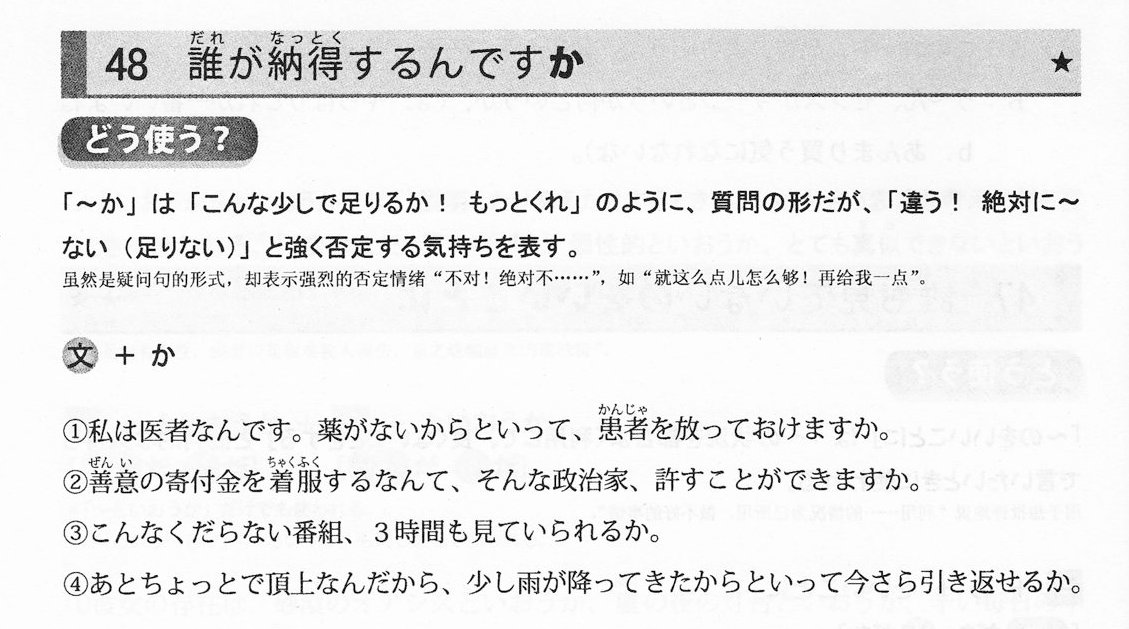 I've not specifically encountered a grammar explanation of「か」formalised in this way, but, from what this page says, I wouldn't view it as a separate use of か - it still fundamentally marks a question.

The difference is rather the sort of question it marks. It just seems that these are rhetorical questions (i.e. those questions which don't require a response), and, in these specific cases, the questions have the obvious answer of "no" from the phrasing. Putting it another way, all of the questions require no answer, as the view of the speaker is made clear from the phrasing/information they choose to include earlier on.

Example 3 I think is the clearest to understand in this way, but all of them seem to follow the pattern of essentially answering the question before it is posed.

Structural translation: Can I watch such a stupid program for as much as three hours? (No!)

What I understand: I can't imagine spending a whole three hours of my life watching such a stupid program.

In this case, the 「こんなくだらない」/ "such a stupid" is the key piece of information given that essentially answers the question. If this information weren't given (and replaced, say, with 「この」/ "this"), the question could still be rhetorical (in so far as it would not actually require an answer), but it would be more open to interpretation. For instance, perhaps the speaker is wondering if they actually have the time to watch the program for 3 hours. Or, it might be expressing a similar sentiment, that the speaker thinks they would grow tired of its stupidity.

Regarding your second question over where you might find translated grammar patterns for the TRY N1 grammar book, I don't know, but regardless, I think that specific question is 'off-topic' for this site, as it concerns resources. For what it's worth, I would say that if you are studying towards the N1 exam, and so are clearly of upper-intermediate/advanced ability in Japanese, you should be able to supplement your study of this book with a wide range of other resources (whether in English, in Japanese, or another language you know).

Not the answer you're looking for? Browse other questions tagged questions grammar or ask your own question.

5
Using も in place of を
1
Where do adjectives fit in the sentence structure?
7
About the coupling of ーてもらう and ーなさい
4
to say + tara form
3
What does んだもん mean and is used for?
0
Does "朝か晩に” as an expression exist?
0
When to use は as a topic marker instead of わ?