I was reading up on noun-related particles and came across 「の」 as an explanatory particle.

From my understanding, firstly we need to add 「な」 to differentiate it from relationship 「の」 particle (「ジムなのだ」 vs. 「ジムのだ」). Now, adding it to the end of the sentences adds an explanatory tone that makes the sentence sound like "It is like that ...". e.g. 「学生なのだ」

Then we have this table of combinations as shown. 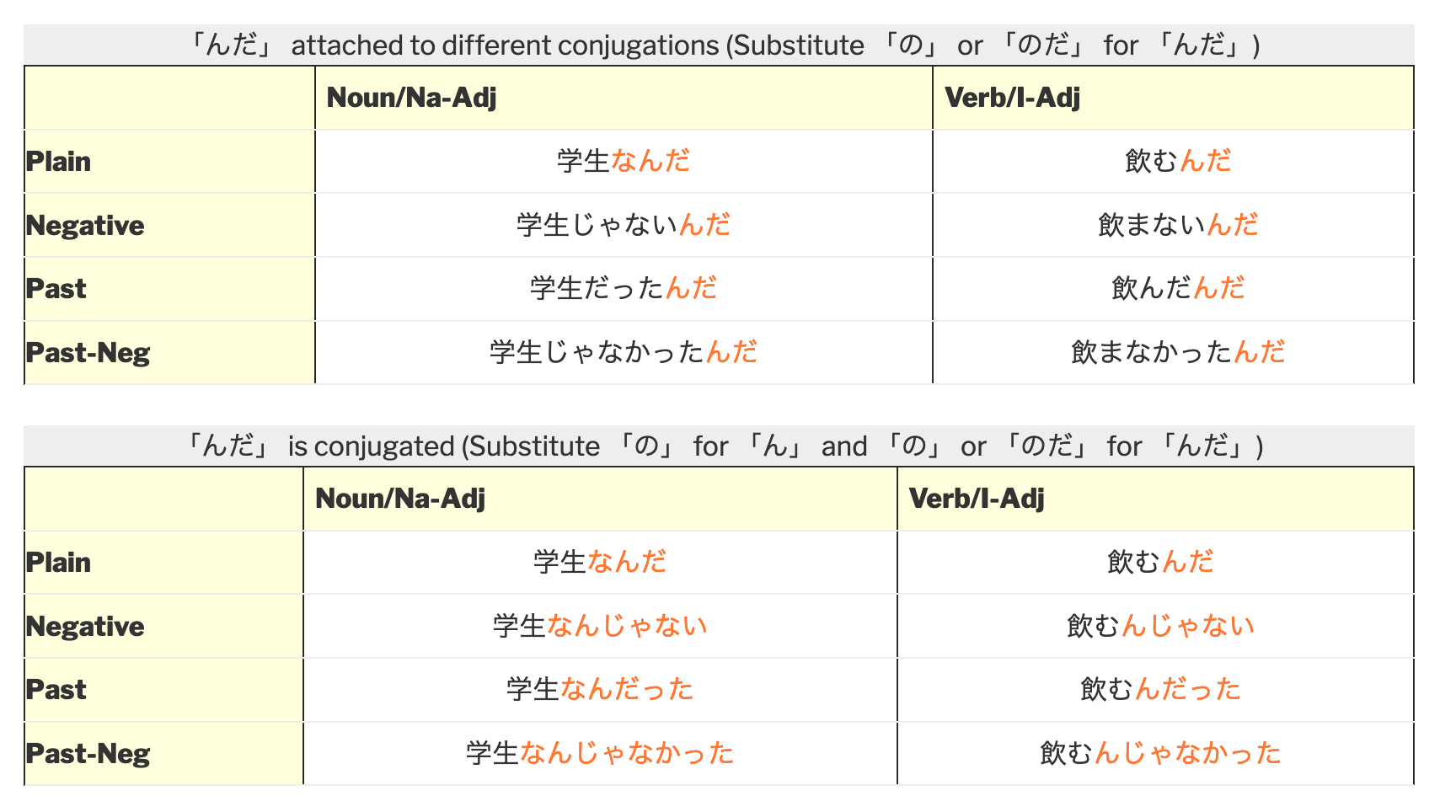 Here is what I think they mean

The main problem is I don't understand the second table and this is what I guess are the translations:

The tables you shared explain things like differences of don't seem to V and seem not to V or don't try to V and try not to V. They sometimes cause drastic meaning change.

Checking that のだ and なのだ cause strong affirmation, or emphasis, let's start with negation.

Think about the below negation patterns of "He is a millionaire".

(1) is simple and easier. The affirmation(なのだ) of negation clause. This just emphasizes the negation clause. It sounds like "He is surely|actually not a millionaire." If the talker of this line was an woman, we could get the 'disappointed' feeling.

(2) is difficult. It has 2 major meanings. This is the negation of affirmation(なのだ). Let me show more examples to explain this case.

(2a) I'm thinking he may be a millionaire.

As you may be surprised, the negative meaning disappeared completely in this case. You could get this as the negation of emphasized affirmation(なのだ) becomes 'guessing'!! なのだ is also used to show a confidence to tell a fact. We could understand this form as negating the confidence.

(2b) He is not a millionaire but the billionaire!

In this case, the negation of strong affirmation(なのだ) becomes partial negation like 'partially right but the point is wrong'. This is often used to excuse something.
「わざとやったんじゃないよ」"I didn't do it on purpose." It acknowledges 'I did' but he/she rather wants to say 'not on purpose'.

Let's take examples "株を買う" "buy stocks". It was hard for me to parse out the difference but finally I got the image below, which is the core model to widely understand the difference. 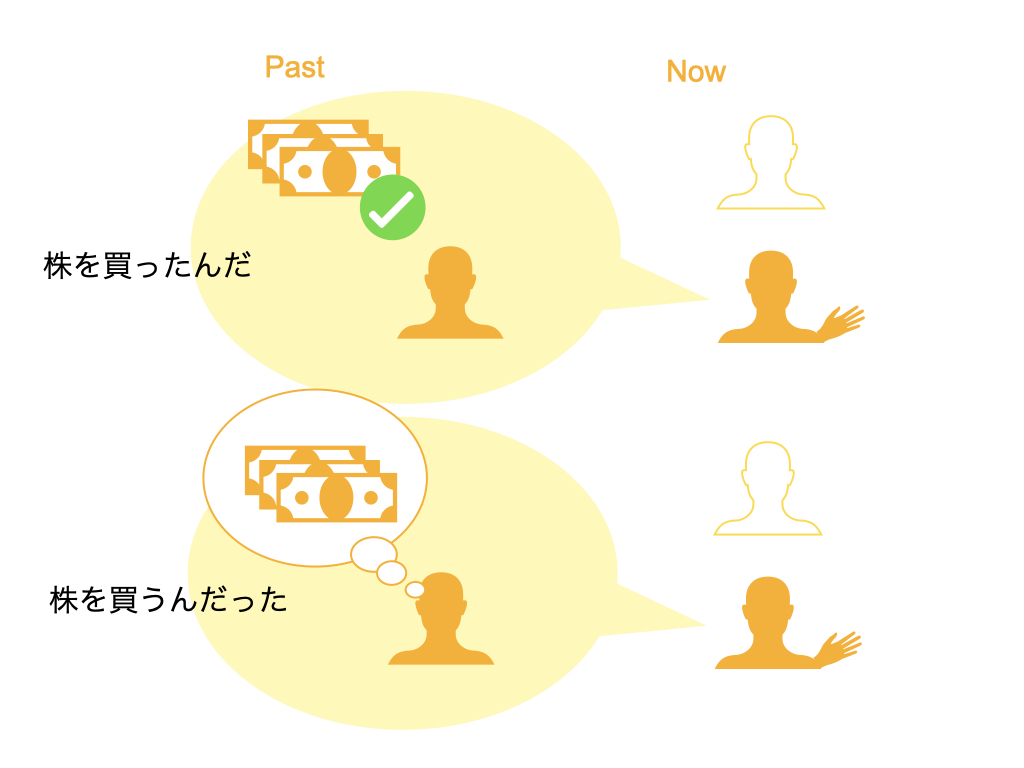 (3) is simple and easier. The affirmation(なのだ) of past tense clause. This just emphasizes the happening in the past while (4) is difficult because (4) has multiple meanings.

(4a) I missed. I should have bought those stocks.

Along with the image above, we could interpret this sentence like "Once I thought I'm going to buy those stocks". This often shows he/she didn't buy them actually.

(4b) It reminded me to buy those stocks by tomorrow.

The fundamental model would be the same as (4a). "Once I thought I'm going to buy those stocks" but in this time it leads to a different meaning like 'forgot but reminded' according to the context.

Negation and Past tense 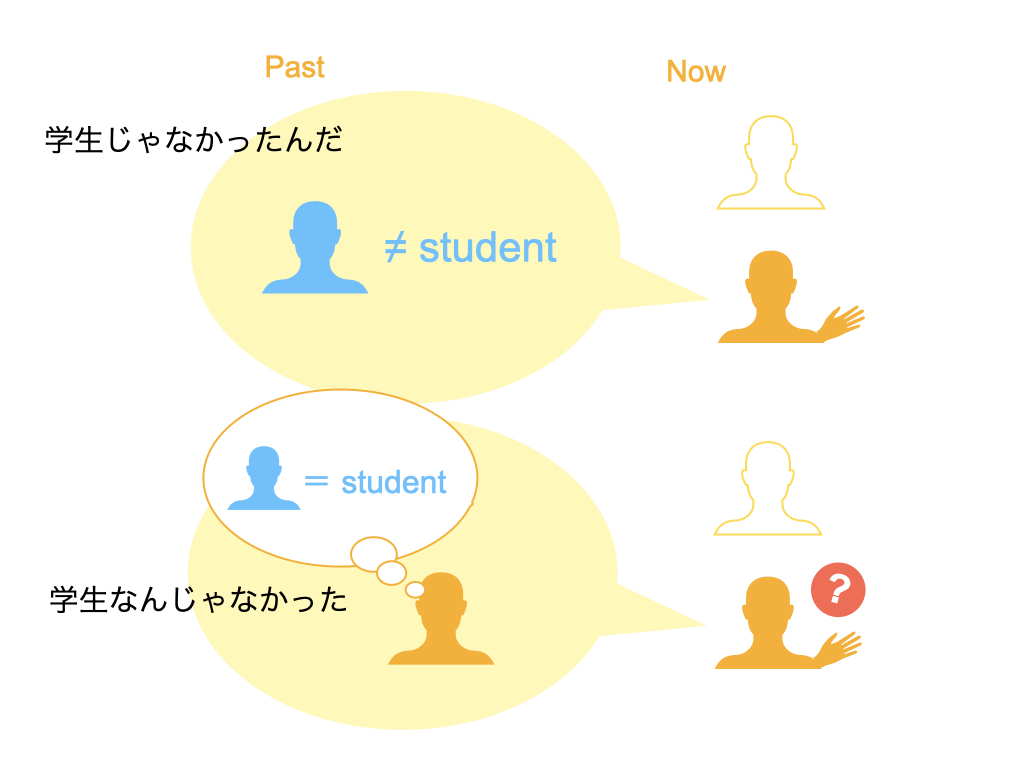 (5) is simple. Just emphasizing "He was surely|actually not a student."

The each meaning of the second table you shared (negation of のだ, なのだ) highly depends on the context. Japanese usually uses them separately especially by the intonation.

Putting past tense to the right of んだ, especially in relation to a question or statement about the past, could also show more certainty than if past tense is to the left, as in いいんじゃなかった being more certain than よかったんじゃない.

I may be oversimplifying things, of course. As with most grammar paradigms like this, not every possible combination is equally likely or even sounds natural, and there may be other nuances.

Not the answer you're looking for? Browse other questions tagged particle-の or ask your own question.

26
So-called の-adjectives - how does の *really* work?
3
How does のは work in this sentence?
2
Do these two questions differ in any way?
7
の in Verb＋のじゃない: Nominalizer or Explanatory?
6
Explanatory 「の」 particle being used twice in the same phrase
8
Explanatory particle「の」 comes from 「ので」?
3
Missing Watashi from Textbook Translation
3
How does the 「どこの」 construction work?