Should I call the basic calculator app on iPhone 電卓app or 計算機app?

I just fired-up the basic calculator app on an iPhone. Is that called 電卓app or 計算機app?

Were I to get a more sophisticated app that calculated stuff like logarithms, would the name change?

The official calculator app was called 計算機, although it looks like it is no longer installed by default. People use these words interchangeably, and I suppose the majority of people do not even remember which is the official name of the default app. The calculator pre-installed on Windows is called 電卓, and so is the calculator installed on my Android phone.

Strictly speaking, 電卓 and 計算機 are not exactly the same. 電卓 only refers to that small gadget you can buy even at a 100円ショップ, whereas 計算機 technically also includes PCs, mainframes and supercomputers. However, although "sophisticated" ones are basically called 計算機, 関数電卓 has been established as a set phrase, and even iOS's 計算機 has a mode called 関数電卓. So if you want something like the one below, it's usually called 関数電卓 rather than 関数計算機. 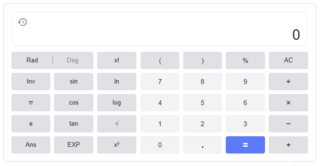 12
Any books or websites dedicated to Japanese tech/IT language?
13
What do we call things that are neither kana nor kanji?
14
Why are the words for prefecture so complicated?
12
Is しまった an appropriate translation for “Oops”?
7
How do you write “share” (as in “tell others”) in Japanese?
3
Other words for and familiarity of 桜でんぶ?
4
Different ways to refer to oneself (2-in-1 question)
0
meaning of these words
11
Can タコ be an offensive word?
5
How to express “being sorry” as a sympathetic feeling?