Usage of other word forms

Jisho.org states that "陽" is another form for "日" and that when it signifies "day", it's implied to have the same meaning. With this example, I've only ever learned of "日" for either the sun or the day. How is it that the same word can have an alternate form?

Actually, it's not unusual to find different forms of the same word in ancient languages. We see this all the time in Ancient Greek, as well as Chinese and Japanese. But as we go back in the language history we see that even if the uses are the same now, they used to be quite different from each other.

The Japanese dictionary 広辞苑（こうじえん）says that 陽 used to be one of the elementary fundaments of divinatory skills, representing an active and masculine symbol, after becoming a reference for "the direction of the sun". The 小学館の漢字辞典（しょうがくかんのかんじじてん）Shogakukan kanji dictionary also states the etymological trace from the sun's elevation as well as the hill hit by its light.

Maybe that's why when nowadays speakers says "sun" with 陽 they usually say 太陽, to specify the 陽。

One should be acquainted to when each one sounds more natural. 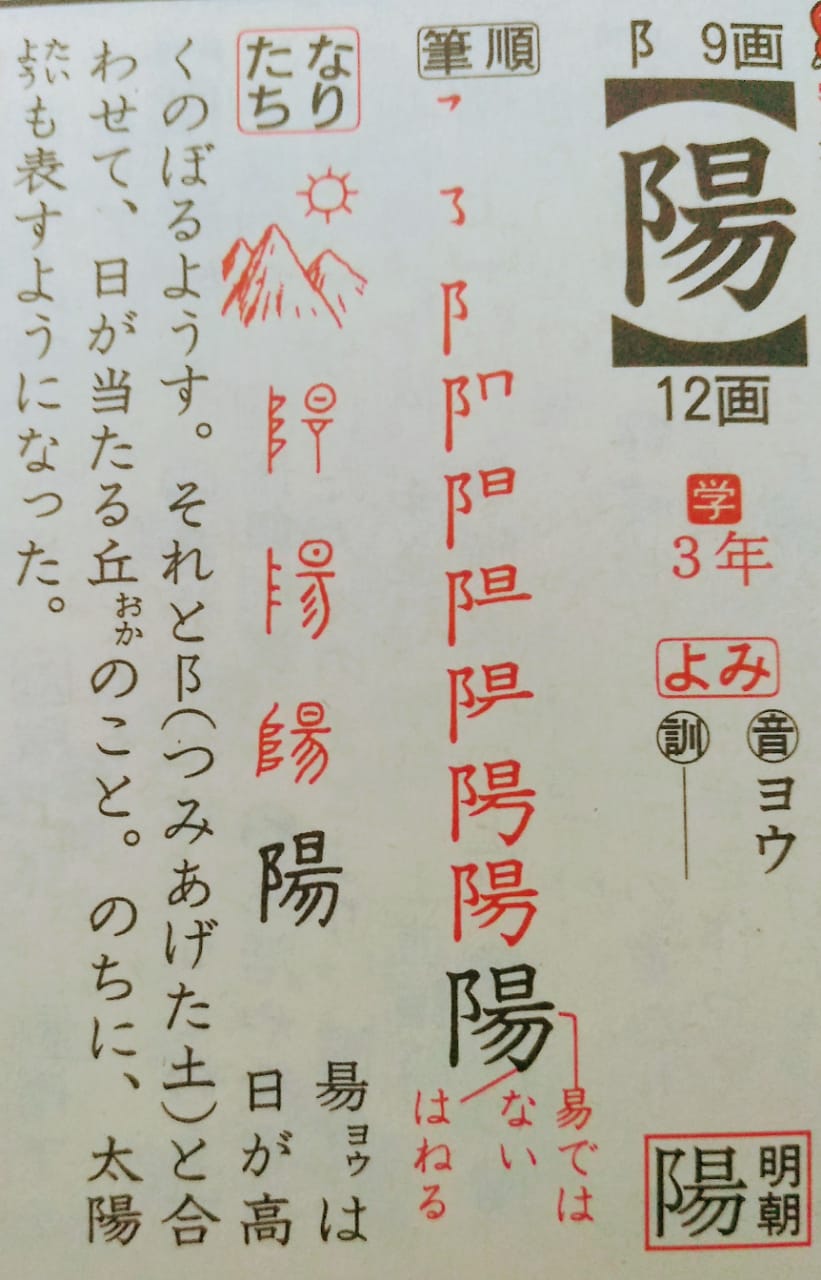 Many words in Japanese have multiple possible spellings. A good dictionary will include all spellings for each term, and an even better one will note which spellings are common and which are rare.

The term in your sample text is ひあたり. Here is the dictionary headline from the Daijirin entry at Weblio:

Here's how to read this information.

So based on the spelling notation here, we can tell that this word has four spellings, with the latter two less common: * 日当り * 日当たり * 陽当り * 陽当たり

... and, in fact, the Microsoft Japanese IME on my Windows 10 machine here offers all four as possible conversions for the kana input ひあたり.

Reading and writing in Japanese

Japanese writing is, arguably, the most flexible and expressive writing system around, due to the way in which meaning and nuance can come from two different forms of a word -- the form as spoken, and the form as written. Manga writers make use of this all the time, by adding ruby (furigana) to words, allowing for things like 騎士【ナイト】, where we have both the Japanese term and the English term combined.

This kind of flexible use of spellings and terms has been going on pretty much since Japanese started to get written down over 1,500 years ago. If you ever dive into the Man'yōshū poetry, a compilation of pieces dating from perhaps as early as the 400s and completed around 759, you'll find this kind of writing all over the place, where a single word will appear with multiple spellings, and each spelling (potentially) adds its own overlay of additional meaning.

This kind of flexibility can result in vast complexity, and the Japanese government has stepped in several times in the past century and a half in an attempt at simplifying and standardizing spelling and kanji use. This is what gave rise to the list of Jōyō kanji in the first place.

Many words have multiple spellings. It's complicated, but it's richly expressive. Hang in there!

Not the answer you're looking for? Browse other questions tagged kanji kanji-choice or ask your own question.

8
Usage of kanji for words usually written in kana
7
Multiple common kanji for a word: which to use?
2
Octopus kanji: 章魚 vs 蛸 vs 鮹
10
Variations in the "same" kanji, how do you know which one to use?
0
Is this a joyo kanji? What does it mean?
11
Does the etymology of 星 suggest the japanese/chinese knew the sun was a star?
0
Why are some names pronounced differently from their on-yomi and kun-yomi?
2
Is there a difference in usage between 賃銀 and 賃金?
1
Different kanji variations for the same word with same readings but different meanings