Meaning or nuance of 調きょ?

I've gotten a bit over my head reading a comedy yuri manga written by one of those big Twitter authors... It's chock full of slang, and I assume this is either one of those instances or it's some shortening of another word I don't know. I've searched in different dictionaries and tried typing it directly into Google, but no useful information is forthcoming.

Here's the panel for context: 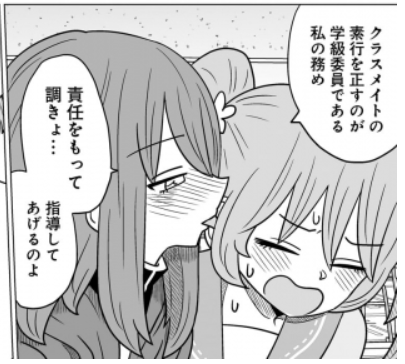 I gather the gist of what she's saying... "It's my duty as student president to correct the behavior of my classmates. [Part I'm not sure about]... I'll give you some guidance."

I'm think it's something to do with holding an important responsibility? Even if that's correct, I'm still interested in what exactly this 調きょ is doing in the phrase. Thanks in advance for any insight!

"It's my duty as student president to correct the behavior of my classmates. [Part I'm not sure about] ... I'll give you some guidance."

I think you have understood the nuance of the sentence almost perfectly. I am surprised you can't fill the gap of the part where you are unsure easily since you have understood 「...素行を正す」: "correct the behavior...". and 「指導してあげる」: "I'll give you some guidance.".

Anyway, 「...素行を正す」is her duty. So, she has the responsibility to teach others "how/what/when to do" to some extent by her standard.

Now, she is correcting what she's about to say to「指導してあげる」: "I'll give you some guidance.". Therefore, what she wanted to say must have been a stronger expression than「指導」initially.

In conclusion,「調{ちょう}きょ・・・」 should be「調教{ちょうきょう}」. The word is often used in animal training. For example, using a whip to condition the horse to run faster in a mechanical manner in order to win the competition.

For that reason, saying「調教{ちょうきょう}」sounds a bit strong to her classmate and she restrained from saying it and softened it to「指導{しどう}」: guidance which is not coercive.

Not the answer you're looking for? Browse other questions tagged meaning slang manga contractions or ask your own question.