I’ve put ⻏ in the search function but got no result.

There are two ⻏radicals. Their origins are different but they are visually identical.

But in a different dictionary (an app I got for my iPad) the two ⻏ radicals are listed differently. One as having 2 strokes while the other 3 even though they are visually identical: 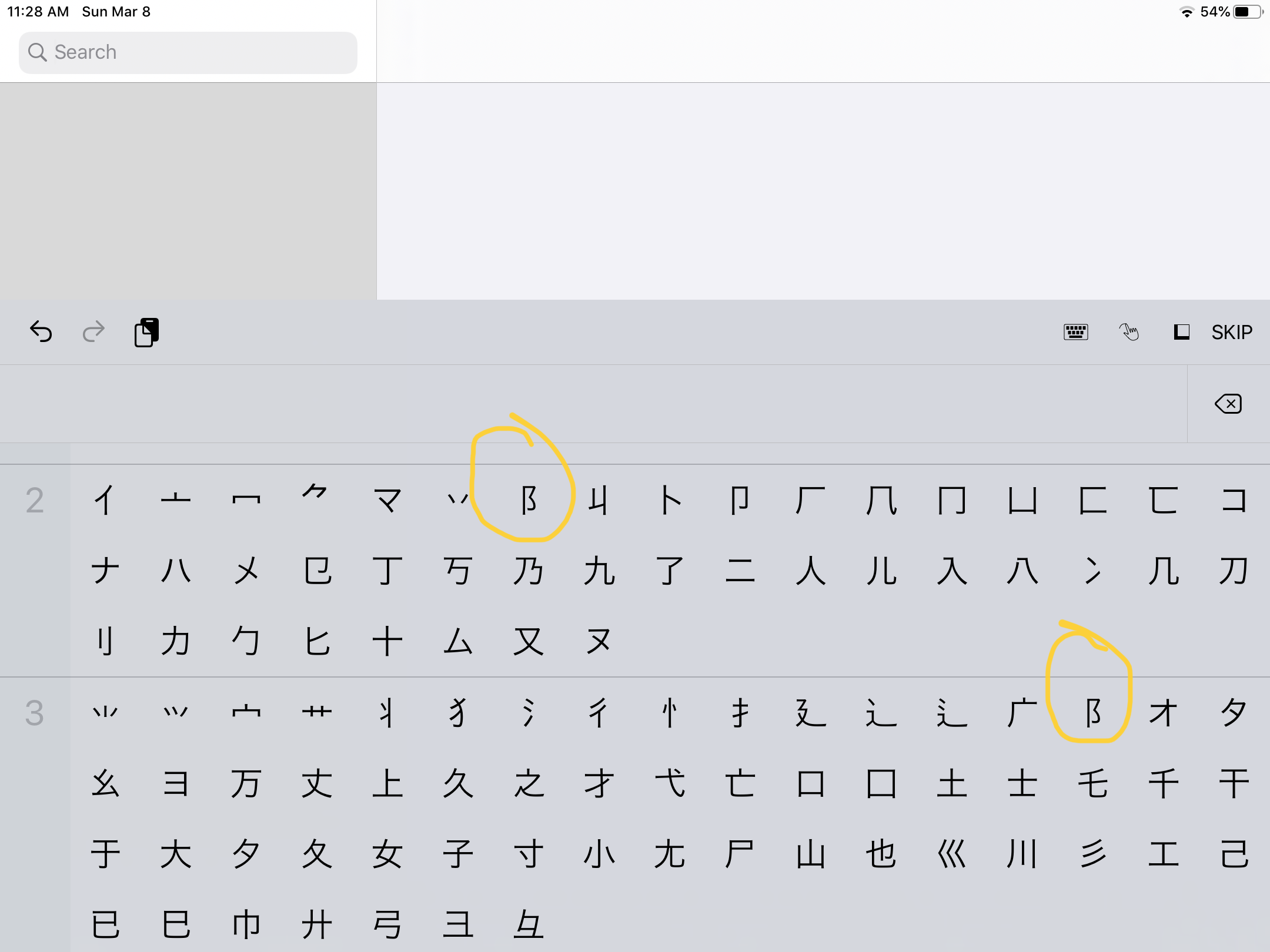 Also, while for Jisho the kanji listing is coherent depending on whether the ⻏is on the left or right side, the one from the application dictionary has kanji listings where the ⻏is in different positions.

So my question is: why? AFAIK dictionaries are frontends for the same database. Why are they listing that radical differently? Which one is right? Is the app one faulty in its radical classification?

I think part of the confusion here is that radicals are not the same thing as components. This is compounded by the fact that many sources use the term "radical" incorrectly, including jisho.org, which refers to what it offers as a radical search, but what it does is actually more correctly a component search.

component is a term for any common part of kanji characters which can show up in multiple kanji. Most kanji are made up of a bunch of components put together.

radical is actually a technical term which refers specifically to just the component of each kanji which is traditionally used to index and order it in dictionaries, etc. There are many components that are used in kanji which have never been used for the purposes of indexing/ordering/etc, and thus are not technically radicals (and there are many kanji that have components which are radicals, but the place that the component is used in that kanji makes it not a radical in that particular case).

I'm not familiar with the dictionary app you reference, but it may be using a more traditional dictionary radical index, which means it is probably only looking up kanji according to their typical/official radical for that kanji (typically each kanji is only assigned one radical, even if there are multiple shapes in it which look like radical shapes, and often the choice of which is "the radical for this kanji" can be a bit arbitrary, or based on non-obvious historical factors).

Jisho, on the other hand, will actually (usually) find kanji which use a particular component anywhere in the kanji, regardless of whether it's the official radical for that kanji or not (however, Jisho does still distinguish between left-side and right-side versions as different components, as you've noticed).

So I think the answer to your main question is probably that the two are actually not using the same underlying data. One is using a radical index, and the other is actually using a component index (which is much more comprehensive than just radicals).

As for why the dictionary app shows that shape as both a two-stroke and a three-stroke radical, I don't really know. As Pablo mentioned, that radical is sometimes interpreted either way, so it is possible that they just listed the same radical in both categories so that it would be easy to find regardless of whether the user thinks it's a two-stroke or three-stroke radical. It's also possible that they're distinguishing between left-side and right-side versions, and just using the stroke count as a (not entirely obvious) way for the user to tell one from the other (since you can't tell by how they're drawn), but if that's the intent I'm not sure how you're supposed to know which is which (except trial and error).

Here are a few key things to note about this.

In jisho.org those two do not look the same, one is clearly on the right side, and the other clearly on the left side. And they are classified as 3-stroke, which is the most common.

On the app, however, they are both centered.

Jisho.org doesn't include small stroke variations; for example the 辶 radical is given in only one version (the "modern" one, with only one dot). I bet that your app give you the two forms, with one and two dots.

Jisho.org uses the components for their logical/etimological value too (if ou select 亀 you also get 龜; and in the components matrix you only have 亀 as a choice). The other app seems to use instead a more visual approach, as can be seen for example on the fact that for 2-stroke components ti gives 42 choices, while jisho.org only gives 31. Several of the variations are not significative.

It seems to me that more thought has been put on the decomposition used in jisho.org (which, I suppose, uses the EDICT free software database); the other one maybe is some computer generated data ?

They don't seem to use the same database. In particular it seems the app doesn't differentiate between left side 阝 and right side 阝.

Not the answer you're looking for? Browse other questions tagged kanji etymology readings dictionary radicals or ask your own question.

5
Are the meanings of 煙 and 烟 identical?
6
Why don't radicals have the same definition for all kanji?
1
Kanji radicals: Question to the radical assignment in dictionaries
2
Radicals : How to remember suffix-es, readings and positions?
1
Dictionary definition of multiple words with identical pronunciation but different kanji
1
Why are there different names for the same kanji radical?
9
Variations in the "same" kanji, how do you know which one to use?
1
How do I know which radical in a character is the primary radical?
0
Help with kanji recognition