Is 直感的 a noun or adjective?

I'm a bit confused why jisho.org marks the word 直感的 as a noun in a sentence (直感的な人) while it's a Na-adjective in the dictionary. Based on the meaning and translation (intuitive person) it's also supposed to be an adjective. Is there a rule I don't know about or is it incorrectly marked as a noun? 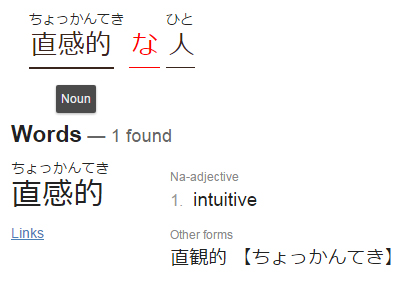 The adjective you asked about is formed from the noun 直感｛ちょっかん｝ in the standard way of adding the 的{てき} suffix. Adjectives formed this way are all な-adjectives.

In the example you give (直感的な人), indeed, it seems to figure as a な-adjective qualifying 人.

You can also form an adverb from it in the standard way of adding に, as for all な-adjectives. Take for instance this sentence (from Tatoeba): 直感的{ちょっかんてき｝には、基本的な意味の最小単位は単語です。

Most な-adjective can also be used as nouns. However with adjectives formed using 的、usually you go back to the corresponding noun by simply removing 的.

For example: あなたは直感を信じないのですか？ "Do you believe in intuition?" There would be no need to add 的 here.

Not the answer you're looking for? Browse other questions tagged grammar adjectives nouns or ask your own question.

18
correctness of い adjective + です
2
adjective before adjective
3
How is the adjective 多い being used as a noun 多く here?
7
Is 遥か a special kind of adjective?
4
Grammar of verb + noun + から
2
How do I use adjectives like 気持ち悪い?
3
Is desu needed at the end of every single sentence? Also, can you add end particles at the end of every word/sentence?
4
形容動詞 attributively before a noun: な or conjugated だ
15
な directly after a noun (not a な-adjective)
4
Odd position of adjective