How have writers in English spelled うん?

I write fanfiction, some of it based on anime. There is the Japanese word うん, used to casually indicate agreement, very familiar to anyone who pays attention to the audio in subtitled works.

I am wondering whether there is any common practice for spelling this word in works written in English. The only example I know of is Sara Backer’s American Fuji. She taught English at Shizuoka University for several years and is clearly very conversant with Japanese; in this novel, she spells it Ng in italics.

Does anyone know of other works in English that use this word? Has anyone noticed a trend?

This may be a somewhat controversial, but I'm not really a fan of Sara Backer's take on the spelling. For the lay man, Ng will most likely receive the normal 'N' pronunciation with a hard 'g' sound following it (like in 'golf'). However, knowing what I do about the language, using a soft 'g' actually does get the sound phonetically written into English script.

The problem is that most spellings of うん will probably be misread by regular English speakers.

When I lived in Japan for a couple of years, I developed the habit of saying 'うん' to English speakers in normal English conversations. Because we usually both had a strong Japanese background, we knew what it meant. However, when I returned to the states, I started to get weird looks from the people I was talking to. They seemed to understand what I meant by 'うん', but it was still off-putting enough that it occasionally lead to questioning looks.

So in my opinion it depends on the target audience.

If you're writing to an audience that has moderate Japanese experience (or greater, of course). You could use 'Ng,' but I would give some consideration to using 'un' instead. The only issue is that 'un' will likely also be misread. Nither spelling is going to get rid of the natural English tendency to misread what is written, but if you could find a way in the text to explain what you mean by 'Ng' or 'un,' that should at least be helpful to the reader.

As @Aeon Akechi points out /m/ is a pretty good way to write it out in phonetic English. For the target audience with Japanese experience, you might be able to avoid misreadings by just writing 'm' whenever you'd use a Japanese うん.

If you're writing to an audience that has little to no Japanese experience, I would probably suggest that you use the English equivalent of 'uh-huh' or 'yeah.' The benefit of this approach would be that you would be able to avoid confusion in your target audience. The downside is that it feels less Japanese, so you'll have to find another creative way to incorporate the Japanese culture and feel.

So I was reading the English translation of Musashi, and I came across how they translated うん into English, and I have to say that I found it pretty satisfying. This is another option you may want to consider, especially because it appears to have been done before in translated works from Japanese to English: 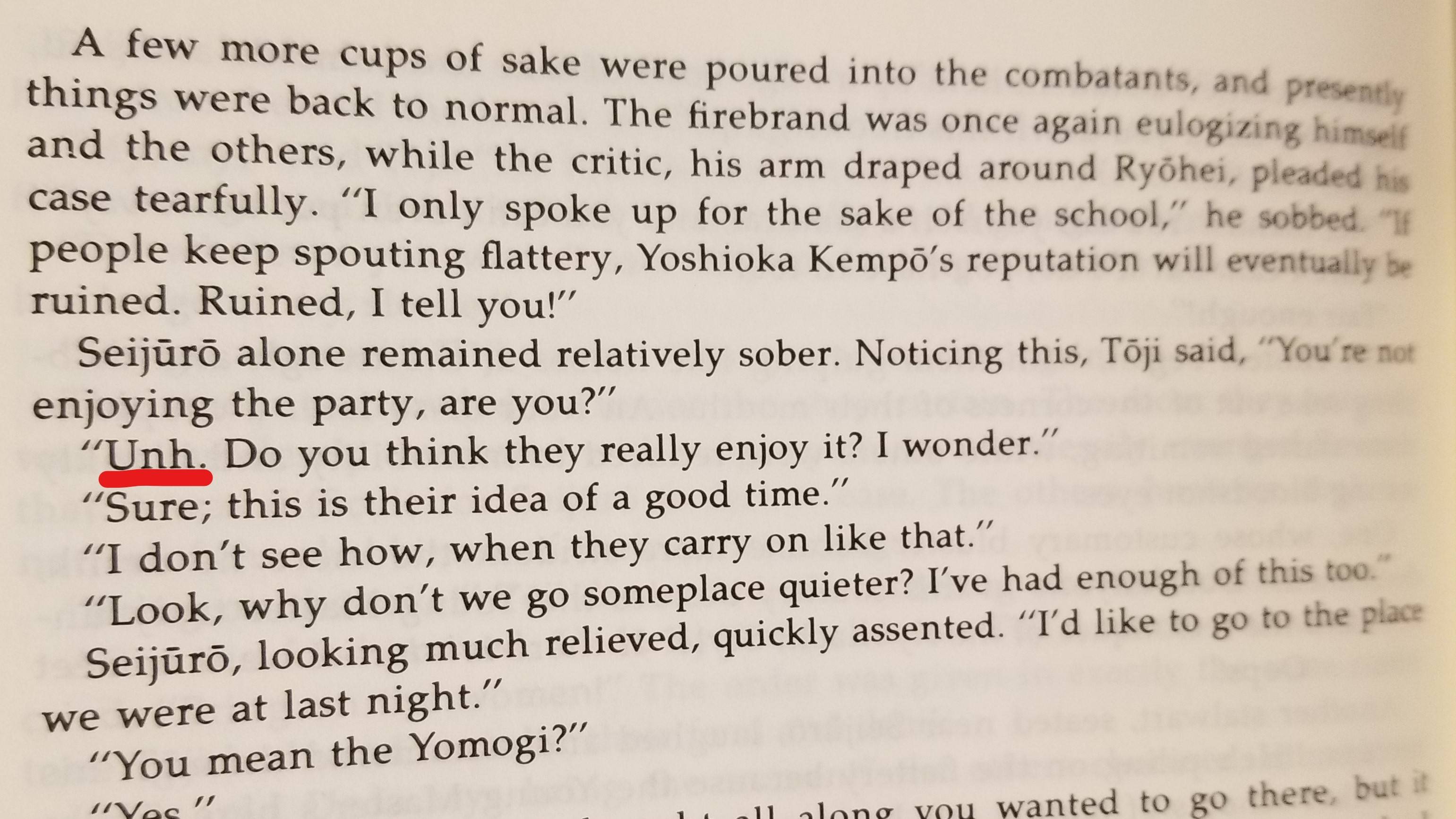 Not the answer you're looking for? Browse other questions tagged words expressions rōmaji or ask your own question.

4
Does 児戯 have the same idiomatic value in Japanese as “child's play” does in English?
1
How do you spell half demon (like Inuyasha) han'yo, hanyo or hanyou?
19
How to pronounce the English alphabet? (A, B, C, …)
10
How to differentiate between んい and に in romaji?
1
In romaji, is りょう spelled 'ryou' or 'ryoo'?
1
How to write 日付 in romaji?
3
How to say “How long have you had this dream?”
1
Unusual words in anime