Did the Japanese have a concept of "Asia" apart from the Eurocentric definition?

Japan had contact with China, India and the Mongols, among others. Is there a term they used for Asia (in the sense of "land mass where China is" or such) before "アジア"?

As for the Japanese language, we didn't have such a word and I don't think we should have had. Ancient Japanese only knew as far as India, that means they only knew one "landmass" in their world. Just like the Nile means "river", or the Sahara means "desert", it was not supposed to have a name, except "outside of Japan".

Most geographic knowledge outside of Japan was introduced with Buddhism in olden times. As a result, ordinary Japanese were said to only recognize roughly three regions in this world: Japan, China, and India. Japan has had constant communication with the Chinese cultural sphere, but India was close to a religious "Promised Land" which is too remote to see with your own eyes. We have an old-fashioned idiom 唐天竺の果てまでも "to the very end of China and India" which is like saying "to the Timbuktu" (see Metaphorical equivalent of Timbuktu or Outer Mongolia). The names of both China and India are often used as synonyms of any far-off land, in a way we call guinea pigs テンジクネズミ ("Indian mouse"; but from South America), or maize corn トウモロコシ (confusingly "Chinese China", because モロコシ already means sorghum; also from Americas).

Though numerous places related to China and India (as far as Eastern Rome) were recorded in Chinese chronicles, it is doubtful if Japanese made to grasp them as geographic entities more than accessories of those realms. According to this paper, at the early stage of the contact with Spanish and Portuguese, Japanese were unable to identify the subcontinent where they said their intermediate ports were located as "India" (天竺), by the time Buddhism was almost perished. They, including overseas merchants, instead believed that Southeast Asia, which was the center of Buddhism at that time, was their "India".

After the acceptance of the Western geography, there still sometimes was manifestation of the traditional world view. An interesting example is 南瞻部洲萬國掌菓之圖 (click for the original map) drawn in 1710. In this map, the idealized India occupies the center one-third, and another one-third to right is South-to-East Asian areas. The whole other half of Eurasia is crammed into the top-left of India, with Europe seen at the very corner like a cluttered marshland (the Netherlands seems to have a high mountain! :D). Of course, this is rather a conceptual image like T and O maps of Christianity. 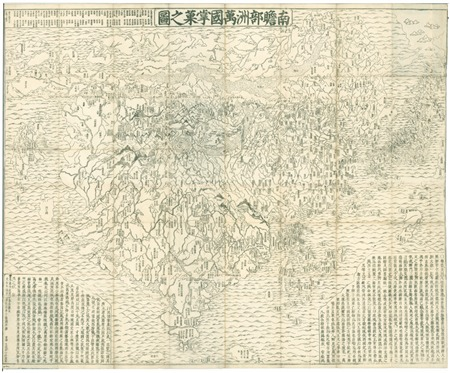 Compare it to 喎蘭新譯地球全圖, a faithful reproduction of the state-of-art Dutch cartography, drawn in 1796. Most of the geographical features and descriptions were correct as much as what modern people expect. It employs a vast amount of Western concepts as well, including the division "Asia". 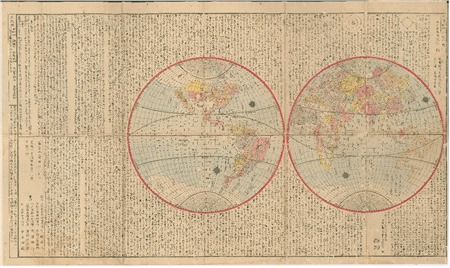 We can see that Japanese in the middle ages never had a chance to know the world to the west of India, thus impossible to objectively recognize the concept of "continent" unless it means "land outside of the islands of Japan", which would be equal to "all other parts of world". We do have a word now, namely 東洋 "the East", typically equivalent with that traditional range of world we used to imagine, but this is obviously an idea after the contact with the European civilization.

Not the answer you're looking for? Browse other questions tagged words loanwords culture or ask your own question.

8
Metaphorical equivalent of Timbuktu or Outer Mongolia
4
What role do the Siddham characters have in Japanese?

19
When and how did USA and UK come to be written as [米]{べい}[国]{こく} and [英]{えい}[国]{こく}?
11
How would one convey the concept of "vouching" in Japanese?
3
Typing Japanese text from images or clothing
19
I am struggling with the sometimes conflicting uses of 先
17
Why doesn't Japanese have a special Katakana form for "hu"?
3
Is "フリーマーケット" sometimes assumed to be derived from "Free"?
1
What is the difference between アジア and 大陸?
25
What's the original Japanese word for door, other than the loanword ドア?
1
What's the origin of the title 親王?