Does the on'yomi of 輪 (リン) have any relation to the English "ring", or is it a coincidence?

Is there an etymological connection between 輪{リン} as in 車輪{しゃりん} and "ring" in English? Or is this a false cognate?

Is there an etymological connection between 輪{リン} as in 車輪{しゃりん} and "ring" in English? Or is this a false cognate?

There are a few things we have to look at to answer this.

As we can see in the Jisho.org entry, rin is an on'yomi for the kanji 輪. On'yomi are the "sound readings", the literal meaning of the spelling 音【おん】読【よ】み, in reference to the sound of the kanji as borrowed from Chinese. So any question about the on'yomi of a kanji is ultimately a question about Chinese.

Looking at the Wiktionary entry for Chinese 輪, and particularly the Pronunciation section, we see that modern Mandarin pronounces this as lún. That's not very close to Japanese rin.

⇒ Japanese on'yomi readings ultimately derive from Middle Chinese. Sometimes we know that a particular on'yomi is more specifically a 唐音【とうおん】 or "T'ang sound" borrowed during the T'ang Dynasty, or a 宋音【そうおん】 or "Song sound" borrowed during the Song Dynasty. At any rate, we can (mostly) ignore the modern Chinese readings. (Sometimes the modern varieties are informative for hinting at where a particular vowel value may have appeared. But that's beyond the scope of this thread.)

The Middle Chinese pronunciation is reconstructed as //liuɪn//. And if we click that ▼ downward pointing triangle to expand the section, we see a sampling of the different reconstructions from various academic authors.

I believe that part of the reason for the wide variety of reconstructions is that Chinese itself has so many different varieties. Think about English even, where different regions or dialects have different phonetic realizations of words. Just the first-person pronoun "I" can have several actual pronunciations, such as:

Looking back at the Middle Chinese reconstructions for 輪, we see that some of them are even closer to Japanese rin than the "main" Zhengzhang Shangfang's reconstructed form of //liuɪn//, such as Pan Yuwun's //lʷin//.

So Middle Chinese //lʷin// (or something like that) was borrowed into Japanese as the on'yomi of rin.

Where the Middle Chinese came from

But we still haven't answered your initial question. :)

The Middle Chinese came in turn from Old Chinese, with a Zhengzhang reconstructed reading of //*run//. The character 輪 itself was composed as semantic (meaning) radical 車 plus 侖 as the phonetic (sound) base. We don't have any further etymological information about this (or at least, I can't find any based on sources to hand).

Following up on the Chinese term, our data was inconclusive.

Where the English ring came from

Turning to the Wiktionary entry for ring, we see that English ring is traced back to Proto-Germanic hringaz ("ring; circle; curve"), derived from Proto-Indo-European (PIE) *(s)krengʰ-, derived in turn from PIE *(s)ker- ("to turn, to bend").

However, PIE is tentatively dated to around the time of the domestication of the horse, maybe 6000 years ago. Old Chinese is reconstructed to around 3270 years ago. That's a lot of time -- so we must still ask if the PIE *(s)krengʰ- might have given rise to Old Chinese //*run//.

We know from long research into sound correspondences between PIE daughter languages that the change from PIE //(s)kr-// to Proto-Germanic //hr-// was a regular shift. We can also see from the list of descendants that all other branches of PIE include that hard //k// at the start, with or without the //s//. So the only branch where the initial //(s)kr-// in reconstructed PIE *(s)krengʰ- lenited (softened) into just //r-//, as in both modern English and Old Chinese, is the Germanic branch -- the branch of PIE that was most distant from Old Chinese speakers.

Given the state of current academia (as publicly accessible by me at the moment, anyway), it appears that English ring and Japanese rin are only accidentally similar in sound and meaning.

Eirikr's answer has pretty conclusively demonstrated that "ring" meaning "round object" is unrelated, but I can't help but point out that there's a second meaning as well in English, namely "ring" as in the sound of a bell.

Intriguingly, in Japanese the common tō-on on'yomi of the kanji for bell 鈴{リン} is also rin, and this character's reconstructed Old Chinese reading is /*reːŋ/. And it's not just the bell itself: in Japanese, the sound of a ringing telephone is りーんりーん, while in modern Chinese it's 鈴鈴 línglíng.

So while they're still unlikely to be directly related (as in descended from each other), it's quite possible that both evolved in parallel from onomatopoeia for the sound of a ringing bell.

I would preface an attempt to answer this question by firmly establishing the original meaning of「輪」. Ring is not actually a good translation of the character in Chinese (which has other words for ring); the two most common translations for「輪」in Chinese are:

This is probably why several academic opinions consider this character

which appears in Shang Dynasty bronze inscriptions as an ancient representation of the word, but was later made obsolete by「輪」. Note that「侖」does not contain a picture of a wheel, so is not related to the above character and not related to the meaning of「輪」.

The meaning wheel is important, because the hypothesised Tocharian borrowing into Chinese for related meanings is for PIE /*kʷékʷlos/ (wheel, circle) rather than /*(s)krengʰ-/, and /*kʷékʷlos/ is speculated to have been the source of「車」(/*kʰlja/). For「輪」to be related to ring, one would need to demonstrate that Tocharian languages showed the same kinds of shift as Germanic languages (as given in @EiríkrÚtlendi's answer), or I would sooner consider「輪」to be related to /*kʷékʷlos/ instead.

Carrying on from @EiríkrÚtlendi's link (How likely are chance resemblances between languages?), I would add that, even if a phonetic shift model between PIE anything and OC /*run/ was proposed, there needs to be much stronger evidence that /*run/ was related to some PIE root, because of chance/coincidence. Take a look at the phonetic series for /*run/, noting that none of these characters apart from「輪」have anything to do with the meaning wheel: 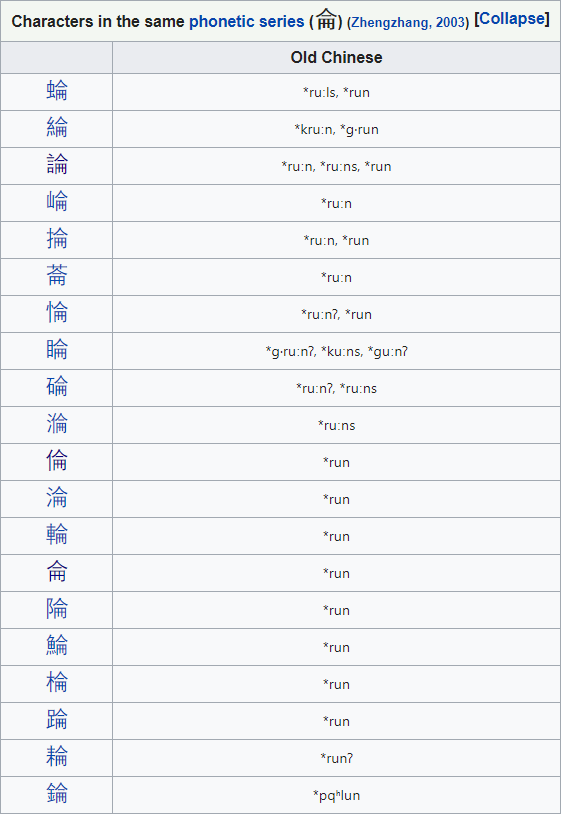 Not the answer you're looking for? Browse other questions tagged kanji etymology onyomi false-cognates .

5
Does 被【かぶ】る have any relation to "cover"?
2
Why is する considered irregular?
4
Origin of ずんぐり（むっくり）
4
Is there any definitional or etymological nuance between the English「Princess」and the Japanese「姫」？
11
Does the etymology of 星 suggest the japanese/chinese knew the sun was a star?
3
Why don't the characters used for Japanese Kanji have the same meaning as those used in Chinese? (Chinese-Japanese false friends)
9
What's the leg doing in 足りる and 足す?
5
頭【かぶり】を振る and 頭【かしら】を横に振る, why the change in pronunciation?