Meaning and parsing of 伸びるままにまかせている

Since yesterday I'm struggling with this sentence:

I kinda get the first part, at least its general meaning, but I'm at a loss with the last part, 伸びるままにまかせている雑木の暗い木立しか、思い浮かべられなくなっていた.

I tried some search on Weblio, but I can't find any form like those. I roughly know what it means from the given translation ("the dark tangles along the walls"), but it seems to me there is more going on.

The translation given in the book is: "By that time we'd been in the discrict for three years, and the name 'Rikugien' brought to mind not the tidy, sunlit lawns seen by visitors, but the dark tangles along the walls".

Edit: I removed a part of the question I left by mistake.

"By that time wed been in the district for three years, and the name 'Rikugien' brought to mind not the tidy, sunlit lawns seen by visitors, but the dark tangles along the walls"

Probably the translator wanted to make it shorter and simple than literal translation like mine. They do not emphasize the scenery after entering inside ,but rather talking about the daily routine they pass by having imprinted not-well-kept trees from the garden to their mind. 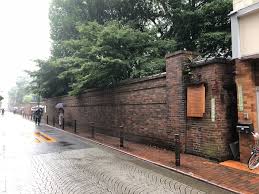 It suggests the gardeners do not trim the trees, but "leave the trees as they want to grow".

This 伸びる does not really talk about the elasticity of the trees, but its development. So, I think "grow" would apply for the translation this time.

This まかせている implies "to let something remain in a particular state". So, the trees are left growing spontaneously.

Im Japanese and just trying translation training by myself now; so, ill do some try.

六義園と言えば、speaking of Roku Gien park, そばに住むようになって三年ほど経ったその頃には、なかに入ってはじめて見ることができる庭園の手入れの行き届いた芝生の明るさよりも、塀際の、伸びるままにまかせている雑木の暗い木立しか、思い浮かべられなくなっていた that is a park where I started live nearby about three years, rebark my mind only through its darkness of trees crossed straighten as they grow-more than its brightness of lawn of the gardens tidy cleaning situation; the latter you cant see without entering in that garden.

Not the answer you're looking for? Browse other questions tagged meaning sentence grammar .