It seems that 襖 has two forms of writing. Here are the two screenshots from Jisho.com: 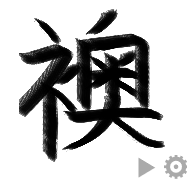 The first kanji has an extra stroke (ノ).

My questions are the following:

This is a typical matter of locality-related differences. The form on the top is accepted in Japan, as well as Taiwan, Hong Kong, Korea; it's the traditional one from the Kangxi Dictionary:

The form below is the variant accepted as normative in Mainland China.

As for "whether both forms are acceptable in handwriting," yes, they are and no, they are not, but not for the reason above. The simpler form below was introduced to the Japanese computer standard JIS X 0208 in its revision of 1983, replacing the form above; it was called an enforcement of extended shinjitai, that is, forcefully replacing the components in more complex characters by simplified versions if there are other characters with the same simplification (in this case, Jōyō kanji 奧 has been obligatorily simplified to 奥).

However, in Japan legally only less than 2’000 Joyo kanji are supposed to be simplified1, unlike the at least (though in practice no more than) 8’000 of Mainland use. Hence, during the revision of 2004, the old form was restored, and it is the complex form that is included in Jinmeiyō list and is thus allowed in personal names.

To keep things short: yes, everyone accepts the simplified version, because since 1983 tht was the only thing they could (easily) type in computers. No, that's not official, and when writing someone's personal name, you'd rather keep the complex form, as only it is allowed. None of it matters, as in fast writing they are probably indistinguishable.

Appendix: you may use this glyph 襖 (U+8956) to check whether your font adheres to the 2004 forms. Also, with a good font you may choose the forms, by adding U+E0100 symbol after the character to force the simple form, and U+E0101 for the complex form.

1 Yes, less than 2’000. The new additions since the original inception of Jōyō list are not simplified at all, and that’s shy there are such mismatches as 録 (original) vs. 剝 (added). Yes, that’s a mess.

27
Distinguishing certain characters in handwriting and print (Similar-looking Kana and Kanji)
5
Meaning of font variation in the case of the character 賭
3
Handwriting liberties
14
Why is there two different ways of writing the 衣 component?
22
Is exact Kanji stroke length important?
5
Reversing stroke direction in kanji for left-handed writing