This is a general question about what to place after nominals when connecting them to constructs like こと.

Lately I've realized I've either forgotten or never knew when I should be using だということ over であること or ということ, etc., with 名詞・形容動詞 (and now I'm wondering about な too), at least in the spoken language. From my understanding, だということ・であること are preferable in 文語, and I found this answer discussing that a little bit, so I'd rather focus on the spoken language here.

I've scoured my resources, as well as stackexchange and some of the Japanese web for hours and come up short, though. I found this question that describes the grammar of these constructions and says that they're all fine, but I don't know their 使い分け. This has become problematic for me lately (at least mentally) when communicating at work and with friends in Japan.

I'd appreciate an answer specifically pointing out the following:

I've listed the constructions below, with my own guesses about their usage/formality (ordered by my guess from most to least formal):

I'd like more information about usage depending on grammar or the specific situation, as well as the 意味合い of these constructs.

I've included example sentences below for everything. Everything below here is ripped from the linked question. Credit to @Chocolate

So grammatically speaking you can use...

(By request from the OP, I've un-deleted the section of my original answer regarding registers of formality in Japanese speech.)

Your first question is regarding which construction can be used with people of what relation to you in speech.

In order to fully understand this, it would be pertinent to take a look at Japanese societal structure.

Within the context of Japanese society there is a common concept called 内と外 (sometimes written ウチとソト). ウチ refers to those people with whom you have a close relationship, and ソト refers to everyone else. In this 2008 paper, the author argues that modern Japanese society actually has a third class of relationship which, while part of ウチ, tows the line between it and ソト (内外集団). 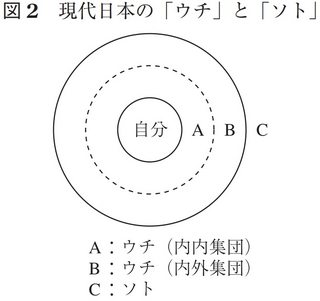 内内集団 (ウチ) would be people like close friends and family.

内外集団 (ウチ) would be people you aren't necessarily close to, but who belong to the same organization/company/department you do. The degree to which someone is ウチ or ソト to you varies within this class on a continuum. For example, going from more ウチ to more ソト, you have within a company people on the same team as you → people in your department → people in other departments.

ソト would be "strangers, 'others', and outsiders" to the other two groups.

The experience/age relationship of the speakers also plays a role in the level of politeness that is to be used, with casual speech being much more acceptable in conversation from a 年上 to a 年下 or a 目上 to a 目下 in the 内外集団 group, even if closer toward the ソト side, such as a company president to a regular employee in a non-formal setting.

So, dividing by relationship class, we have:

I feel that this mostly answers your first question.

(I'm still thinking about your second and third questions)

Not the answer you're looking for? Browse other questions tagged grammar particle-と spoken-language nouns copula or ask your own question.

2
So, what is the rule for this construction

4
Embedded question followed by と
1
How do I express "while" as in "While I go buying it for us, please wait here"?
5
When should an embedded question take と?
1
How is this nominal phrase meant
1
食べる時間＿＿ない: Is さえ/も/ででも possible in this context? (Please read further)
12
「です」, what is it really? Is my analysis correct?
1
Can だ be left off in informal sentences?
5
Research on かのように, and other よう constructs
4
Dropping だ in sentences