What are these two characters marked red? い＿める and いじめ＿いよォ?

What are these two characters marked red? I'm trying to learn reading some kid books, some Bonobono font chars meaning though is a mystery for me. 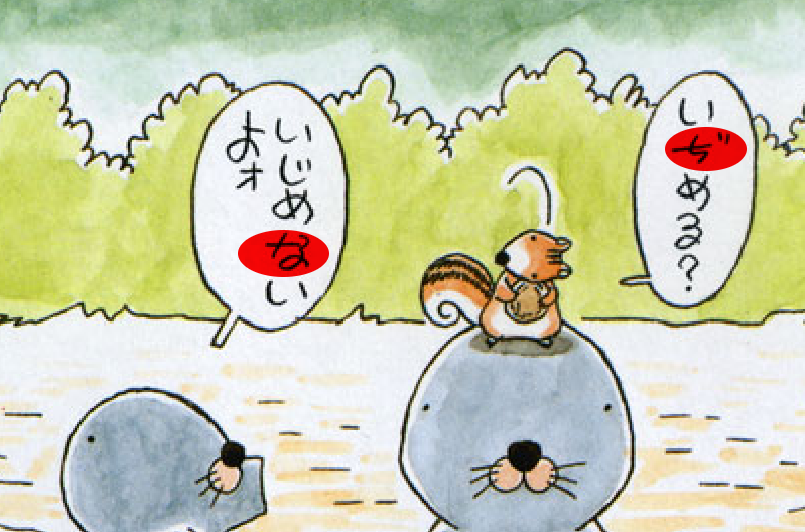 To actually answer the question, the characters are な (na) and ぢ (pronounced ji, but di in certain romanisations).

To address the meaning of what's being said, I understand that there is a slight difference in the meaning of いじめる and いぢめる, both meaning to bully/tease.

いぢめる has some sense of cuteness/playfulness about it: perhaps you're teasing someone, but you don't really mean for your words to hurt them -- you might use the kanji 苛める.

いじめる on the other hand has the true meaning of bullying about it: more hurtful and unpleasant -- you might use the kanji 虐める.

Note, however, that the (strictly) correct 'spelling' of both of the above verbs in modern Japanese is いじめる.

The use of ぢ in いぢめる is a historical spelling of the verb, before ぢ was (largely) rationalised to じ in the 1946 script reforms. Both じ and ぢ are pronounced the same, except for I think in certain dialects in Kyushu and Shikoku.

Note, the word is いじめる and is normally never spelled いぢめる. It seems spelling it that way is a quirk of this character.

(Normally じ and ぢ would be pronounced the same (ji), but in this case it’s possible the artist was going for something more ‘squirrel-like’ in pronunciation, like an emphasized/partially-voiced ち.)

Not the answer you're looking for? Browse other questions tagged hiragana learning or ask your own question.