柔術 is often rendered in English-speaking countries (and France, Germany, and Brazil) as "jiu-jitsu" or "ju-jitsu", even though the actual Hepburn romanization is "jūjutsu".

The historical hiragana here explains how we get the "jiu" in "jiu-jitsu", but then shouldn't it be jiujiutsu, not jiujitsu? Does rendering it as "jitsu" have any basis in historical Japanese pronunciation or orthography, or is it a corruption by speakers of European languages?

I'm not very familiar with the diffusion process of jujitsu, but the practice to read 術 somewhat like じつ exists(ed) in the traditional Tokyo dialect.

This is a well-known phenomenon: //u// in Eastern dialects is generally unrounded, so a weakened //ju// could be indistinguishable or even merged with //i//, under the influence of the palatal //j//.

Since the modern standard language is based deeply on the native Tokyo pronunciation in phonetics, this feature has been near-officially received in Standard Japanese. However, along with the decline of "pure" Tokyo accent, the pronunciation has almost faded out even in Greater Tokyo in our generation (together with 鼻濁音 etc). I myself only occasionally hear such accent from senior speakers (≧ 50s?).

I found a document that NHK (the national broadcaster) decided to abandon a recommendation that tolerated the shift of //ju// to //i// (originally defined in 1960).

Thus, it is quite possible that those who disseminated jujitsu actually pronounced the word in that way themselves, and so is it transcribed naturally.

The history of the character's readings

Let's look at the historical and reconstructed pronunciations of 術:

Almost all of these are centered on a core vowel value of roughly //u//. Even the outlier Cantonese has an //o//, a back-of-the-mouth sound not too far from //u//.

Phonology, and some of what happens when words are borrowed

Unstressed vowels in English have a tendency to gravitate towards the front of the mouth, often producing actually-spoken vowel values like [[ɪ]] (the short "i" like in hit), [[ɛ]] (the short "e" sound like in bed), or [[ə]] (the so-called "schwa" sound like the "u" in but or the initial "a" in about). So a shift in the pronunciation of this unstressed second syllable in jiujitsu is not surprising.

The う in Japanese, meanwhile, has an //u// sound that is more towards the front of the mouth, and less open, than the English //u//. Strictly speaking, phonologists sometimes transcribe this as [[ɨ]] or [[ʉ]]. This sound, especially when short, may come across to English-speakers' ears as something closer to that short [[ɪ]] like in hit. So that short う sound in the じゅつ of じゅうじゅつ, when heard by an English speaker, is predisposed to gravitate towards a short [[ɪ]], producing the odd jiujitsu or jujitsu spellings we see today.

In Japanese, the "u" vowel /ɯ/ has a centralized allophone [ɨ] (sometimes written [ɯ̈]) when occurring after /z/ and palatalised consonants /Cj/.1 This is 'halfway between' the standard Japanese vowels /i/ and /ɯ/ (and close to the English vowel /ɪ/ in e.g. hit).

Hence じゅ is commonly realized as [d͡ʑɨ] (as opposed to [d͡ʑɯᵝ]). It may be because of this (and the contrast of its shortness with the first 'stronger' うう in 柔) that some romanizations of the early 20th century transliterated the word as jitsu.

As broccoli forest notes, the Shitamachi dialect fronts [d͡ʑu͍] to [d͡ʑi], and in the Tōhoku dialect /i/ and /ɯ/ are neutralized generally.

Note that while the Hepburn romanization jujutsu was established as early as 1872,2 this was not an ubiquitous system at the time, and even less so in works printed outside of Japan. The earliest English references to jujutsu appear in the Japan Weekly Mail, where it is spelled jitsu:

Jiu jitsu (wrestling) is also taught, but not much practised by gentlemen.

While there was a mix of jutsu/jitsu spellings in the 1880's and 1890's,3 a number of popular English books on the subject were published around 1900 which used the jitsu spelling:

Looking at the google n-grams data, it appears this is around the time that this orthography began to gain widespread usage outside of Japan: 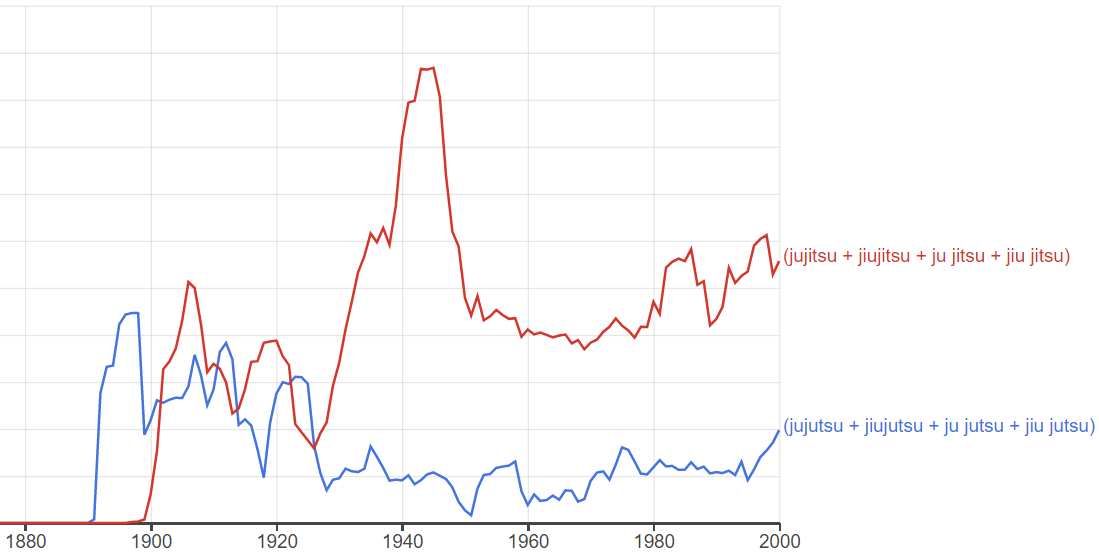 As you speculate, before the widespread adoption of Hepburn the expected form jiu was indeed occasionally used:

... the Japanese wrestling game of jiu—jiutsu, which physically demonstrates that if you yield at opportune moments you may turn your adversary's force to your own end and advantage.

With the quickness that came of long training in the “Jiujiutsu” school he ran in under the weapon and knocked out his adversary's wind with his head, catching him round the waist and throwing him heavily backward.

Not the answer you're looking for? Browse other questions tagged pronunciation phonology rōmaji or ask your own question.

14
The nasal allophones of /g/