Is there a rule as to when to keep the articles like San,Las, Los,La, Le (L'), Les (yes, my dear Dutch, not forgetting Den), in names on separate katakanas? Sometimes there is no choice, like in Las Vegas or San Diego, but, for e.g. San Antonio, as far as I know you don't write サナントニオ but サンアントニオ.

Is LA just an exception as it has been known in Japan since so early times that it came like that "by accident", and others were created later also considering the structure of their names?

There are considerable variations in how a 外来語 is transcribed. The wikipedia page for LA says 日本語では、外務省など政府機関においては「ロサンゼルス」としているが、「ロサンジェルス」「ロスアンゼルス」「ロスアンジェルス」などとも表現されている.

There is a good article by NHK here. Apparently, the Japanese government has changed the official way of transcribing country/city names this year. The article also talks about why some styles were chosen over others, so generally a good article on this topic. 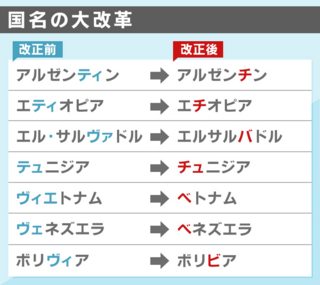 In general: there is no standard way of coercing non-Japanese words into katakana, and hence there are many different acceptable ways of doing it. There are loose "styles" or common patterns, but they are by no way absolute and the trend has also changed through time. As a result, many different variants exist. Frequent words seem to find a dominant 表記 (like プーチン、ロサンゼルス）, but even established style can change (e.g. メリケン -> アメリカン）. Generally, it is advisable to stick to a single style within a single document (having variations is called 表記揺れ and is considered poor style).

11
Why are the katakana important to learn?
3
Why is Danny written & pronounced ダニー and not ダニ?
4
Why do some loanword sounds get "contracted" when katakanized, but not others?
11
Why is this katakana not reversed?
5
「星のカービィ」- Why ィ and not ー?
1
Why is it that Neptune's name is written as ネプテューヌ and not ネプチュヌ?
5
Why is Beach ビーチ and not ビーチュ, why is Cake ケーキ and not ケーク?
1
Why is the Japanese word for Brunei ブルネイ and not ブルナイ?
7
Why is beatboxing called 「ヒューマンビートボックス」?