A Question while reading mangas 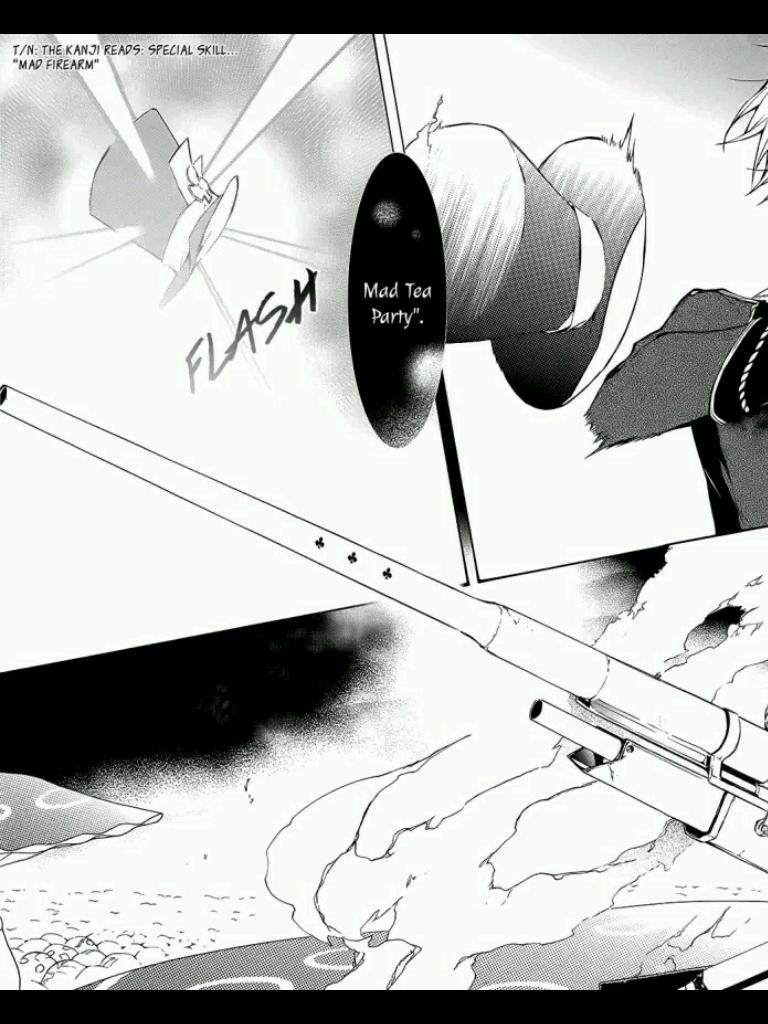 I love to read manga, and I am always confused when a character uses a spell, and a T/N is written somewhere stating the literal meaning.

Example is when Mad Hatter (From Gaitou Alice) uses a spell, and is translated as Mad Tea Party, but a note above states that the Kanji is read as Mad Firearm. How does this work? Is there a term for instances like this?

This first draft is sent before any image was posted so will probably be edited or incomplete later... BUT

edit: Looking at the image posted, another (less linguistic) option is also that different rounds of translation and disagreeing translators could be at fault.

see @Kess Vargavind 's comment on how authors can add creativity to kanji by altering their typical reading with furigana that typically are to match a non-Japanese language word. I would also note that typically when I have seen these used they are to refer to fantasy elements specific to the story at hand. in the example given in the comment, the author isn't just talking about the idea of vampires, but the specific vampires that exist within their story.

A similar feature can be seen in My Hero Academia, where the character 敵 (meaning opponent or danger) has the furigana ヴィラン. This specifies that they are not just talking about bad people, but rather the specific type of super-villains that appear in this world.

This means that the kanji might have a different direct translation than the furigana.

Another instance is that different phrases may carry different connotations to a Japanese audience vs. an English speaking audience. Or certain puns or portmanteaus don't work in a given language.

Take Pokemon move's for example which is probably the closest analogue to this case. There exists a move called Acid, in English. Although scientifically an acid is either something that donates a proton or accepts an electron pair (blah blah), in the English lingo we think of acids as goopy liquid that ""melt stuff.""

However, the Japanese name for this listed move is ようかいえき, which if they used kanji would be 溶解液, which I use at my job to mean what you get when you dissolve something in a liquid, eg. sugar in water. But can also refer to a liquid that would do the melting or liquifying.

These two words clearly don't have the same meaning if you would look them up in their respective languages' dictionary, however the tend toward the same connotation. A sense if a liquid being used to turn the opponent ... also into liquid mush.

So ... I personally wouldn't worry too much about noticing differences in the made up names of made up fantasy elements. But potentially reading both (if the translator is clever) may nail down specifically what the connotation is supposed to be.

Not the answer you're looking for? Browse other questions tagged kanji manga or ask your own question.

5
When is よう written in kanji as 様?
0
Nanori reading needed for JLPT?
7
What is the name for kanji that only have ON reading, but no KUN reading?
0
‘Nanpū’ (難風), ‘Bōrei’ (亡霊) and other matters
2
How does ayakashi, あやかし = 妖 or 罔像?
1
Help with a few sentences using 許す
2
The reading of お母さん
4
風邪: reading and writing
3
Proper reading of 面