Learning the time of day I found that 朝 or あさ means morning, 昼 or ひる means afternoon, and 晚 I expected to be night but Google translate is saying it's moth for some reason. Does this 晚 only mean night when paired with certain characters?

Google Translate, and indeed just about any machine translation engine, is still often shit for the Japanese ↔ English language pair. Do not rely on Google Translate to learn another language, especially when looking at a single word.

PS: For what it's worth, the actual word for "moth" is 蛾【が】. I recommend that you use any of various online dictionaries when exploring a single word. Here are some freebies:

Digression, and example of the perils of machine translation 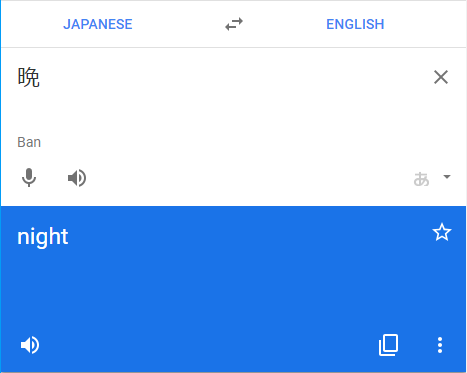 However, even though the kyūjitai character has the same meaning, Google mistranslates this as "moth" if the source language is set to Japanese. 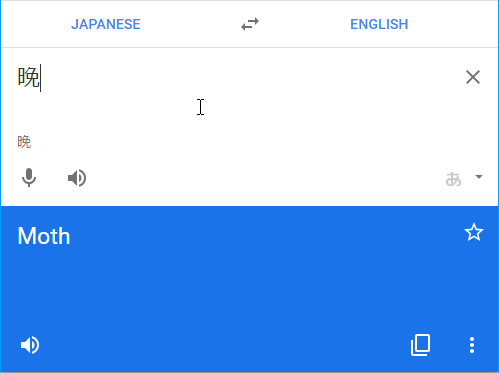 When auto-detected, Google [on my machine, anyway] identifies this as Chinese and translates it as "late". 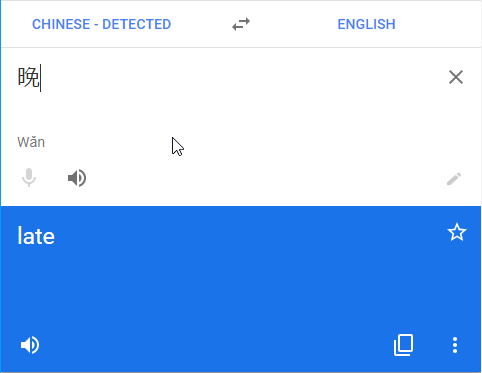 Not the answer you're looking for? Browse other questions tagged kanji time or ask your own question.

14
On the replacing of kanji made obsolete in the 1946 reforms with similar-looking kanji.
21
What is the role of 空書 (writing kanji in the air) in modern Japanese?
3
What time of day does [後]{のち} cover in 天気予報?
1
Rosetta Stone's usage of kana for words instead of kanji
6
I cannot recognize this kanji
3
Furigana: Usage and application
3
Why is 九時 (9 o'clock) pronounced "Ku-ji" and not "Kyu-ji"?
1
How to determine the meaning of a Kanji?
2
Is There A Japanese Word ( preferably a single Kanji ) For Owner of Black Stallion?