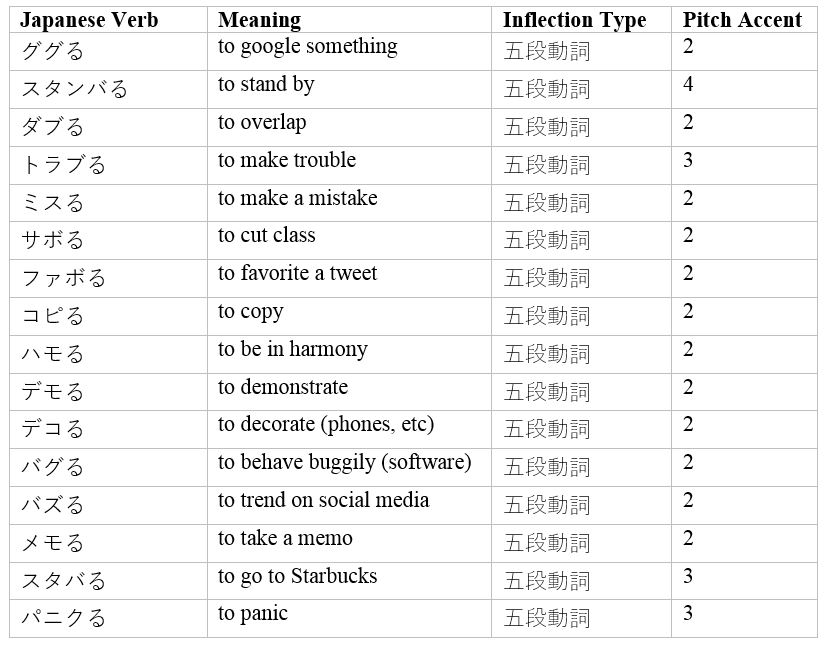 16
Are there words which consist of katakana and hiragana letters together?
5
What are the principles behind turning foreign language words into verbs?(e.g. ググる and サボる)
13
Why is デレる ichidan? (Etymology of デレる and デレデレ)
5
Why are there very few non-する gairaigo verbs in Japanese?
3
How many true verbs and i-adjectives are there in Japanese?
0
Why った after a noun デコった?
0
are there nouns that can function as another part of speech?

2
Action verbs and conditional ～ば
1
Understanding Japanese verbs
5
Verbing to form 五段 verbs: does it only generate ラ行 verbs?
5
What are the principles behind turning foreign language words into verbs?(e.g. ググる and サボる)
2
Double/compound verbs?
3
What is the difference in usage between nominalized nominal verbs and nouns forming the same nominal verbs?
9
What are the characteristics of the suffix ～びる?
5
Why are there very few non-する gairaigo verbs in Japanese?
4
む verbs and corresponding ましい adjectives