te-form being used two times with the same verb

I saw the following sentences in a picture (attached to the footnotes) and the way it's written exactly the same:

Since it's from a social media, I think the sentence was broken out and a part of it dropped to the following line. But I don't understand the reason why the sentence finished in the te-form and using the same verb two times.

Besides, as you can see, there is a line break between the two sentences, and the person used the te-form for the 悲しい adjective and I don't know whether is connected to the sentence or not, and I don't know if it's being used as an adverb or something else.

The person seemed to be breaking up with someone, because in another sentence that it's not in the picture, they used 別れ. 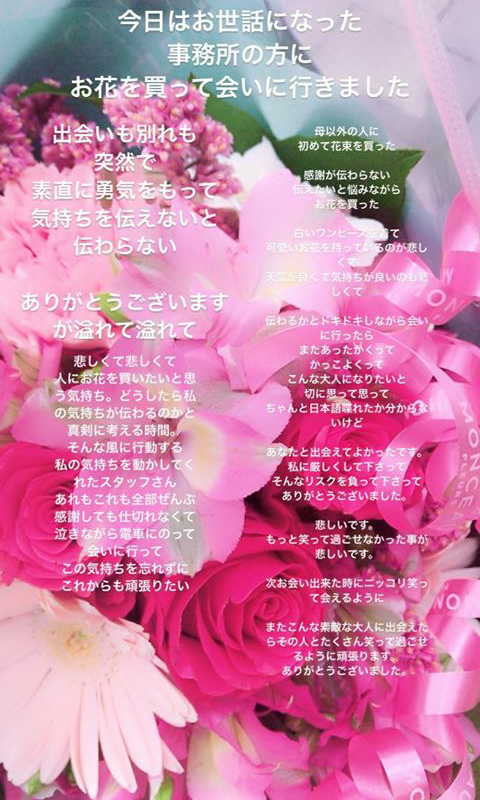 Is this a message card or something? Although this looks a bit "self-absorbed" to me, basically there was something very sad, but the author is also thankful to the "staff" at the same time.

Apparently ありがとうございますが溢れて溢れて is a title, so this te-form connects to nothing. Ending a sentence or a title with a te-form (or てさ, てね, てよ, etc) is possible. See: て form at end of phrase but not being used for requests In a sense, this heavy use of the te-form makes this "poem" look more informal, colloquial or emotional. 溢れて is repeated simply for emphasis, just like how English speakers say "I ran and ran."

悲しくて悲しくて seems to be the te-form for reason/cause. This person wanted to buy flowers because he/she was sad... I know that's an odd reason to buy flower, but that's how I read this part.

In the case, て is the first word of -ing, ている in Japanese .

Repeating the same word is one of the common ways to emphasize it, and it makes the expression more emotional, colloquial and so on.

1
Translation of 泳ぎたがっている
4
Ending sentences with the て form
3
I don't understand what's the te-form purpose in here
1
Are these -てから the same?
1
Did I translate the て-form correctly in this sentence?
1
How is the て form used in this sentence?
1
Possible explanation for the ている-form also being used as past tense?
1
Why are the verbs connected with てhere? 連れて帰って
0
What is this ~れ verb form used in the middle of the sentence? Is it ~られて/~れて without the て?