I've been studying Japanese for about 3 years, passed N1 last December (was not expecting that) and wanted to brush off one of the biggest questions I've ever had on Kanji (bugging me for about 2 of the 3 years). You see, there's this Weird Kanji on this rock that I can't seem to find anywhere else: 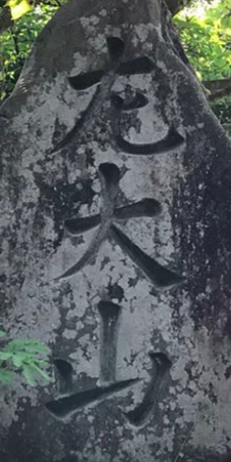 The second two say 大山{だいせん}, which is already 表外読み, so this is obviously a rather old inscription I'd assume.

I've tried looking this kanji up everywhere, such as on https://www.kanjipedia.jp/sakuin/soukakusu/4 (which tbh doesn't even have that many kanji, only those needed for 漢検一級 and a little more) and https://kanji.jitenon.jp/ which claims to have 12,300 kanji entries. No luck though.

I've even looked through Chinese Hanzi dictionaries to see if it's some old form or whatever. The closest I've come is http://www.zdic.net/z/86/js/20A2C.htm which is supposedly a variant of 巵{さかずき} which means "sake cup". Pretty sure this mountain has nothing to do with Sake Cups.

Honestly it's probably lurking somewhere in the Daikanwajiten, but I don't really have that huge thing at home (nor in my city I think)

I did find this though: http://www.zdic.net/z/8b/wy/21BC3.htm It seems like a pretty lonely hanzi/kanji, with no definition of any sort... I went to the "web discussion" on the hanzi, and some user talked about stone inscriptions... Does any Kanji God know what this Kanji means/is?

Edit: I realised that the user in the discussion was actually stating dictionaries of characters (I assume those that contain the mystery character). These included 興聖寺四十人等造碑像記, 增訂碑別字, 碑別字新編, and 異體字字典 廣碑別字, the latter of which led me to an online 異体字 database.

oh. This was an archaic 異体字 of 左 all along. How whimsical. At least now I know that this is on the left of the mountain, instead of having to mentally associate the mountain with sake cups.

The kanji, the full term, and the reading

Chocolate commented on the initial question that she'd found a blog post with more information about the location of the stela:

The post includes a picture of this same stela, albeit at a different time of year:

So we can tell that the 㔫大山 of the stela is interpreted by this other author to be equivalent to 左大山.

Since this is indeed in Tottori Prefecture, we know that the 大山 is indeed read as だいせん, and not as おおやま.

The specific location: what does 㔫・左 refer to in this context?

For any map geeks reading this, I tracked down the exact location. This link should open in Street View, looking roughly east by southeast, showing the 㔫大山 carved stone on the left.

Sometimes Google is awesome. Being able to find this obscure location in Street View was really cool.

The 㔫 does seem to be just an alternative form of 左. But, ultimately, I'm baffled what the 㔫・左 part of the stela is intended to mean. I'm curious if anyone can shed some light on that.

7
Usage of kanji for words usually written in kana
4
Few hard to recognize handwritten characters in miniature umbrella
4
Heisig story #30 (Nightbreak) 旦, shouldn't it mean "daybreak" instead?
9
Variations in the "same" kanji, how do you know which one to use?
2
Furigana: Usage and application
1
Do the Japanese speak with On and Kun in daily conversation?
3
What does the kanji '図' mean?
2
Confusion over それで+なら meaning