In one panel in 犬夜叉１, the character says: 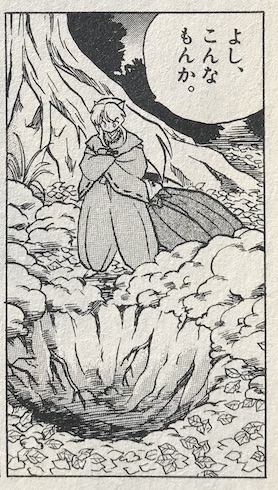 He says that after digging up a hole to hide his fellow.

I suppose that もんか is a contraction of ものか. As far as I know, that should carry a meaning of irony (as if this…). It doesn’t, however, fit there. It was his idea to dig that hole, there was no discussion about it, no objections. No conversation on that topic preceded.

Another meaning of ものか I found was to express a surprise. That fits there even less.

So, this should be enough. (The hole is big/deep enough already.)

would fit there. But that doesn’t match the Japanese version. Or does it? Is there some meaning of the ものか (or even just もんか) I’m just unaware of?

「よし、」indicates a sense of completion or at least minimal satisfaction with the result of one's labor. If this part were to be translated here, I would do it as 'Alright,'.

こんなもの・こんなもん is expressing the idea 'The way it is' or 'the way it should be'. Not necessarily a ringing endorsement of his own work, just a sense that 'it is the way it is' (i.e. 'good enough').

The か is more of a rhetorical device, as in 'isn't it' or in this case 'I guess'. No question mark necessary.

"I guess this about as good as it's going to get"

It seems to me like「もの」is here to intensify the utterance by adding a nuance of disbelief or disappointment.

16
Blue blistering barnacles, what is Captain Haddock saying?
3
Can I use ほど in a comparative context, similarly to how I'd use the English word 'like?' (And if not...what can I use?)
1
Does 'かわいそ' in this context mean 'is pitiful' or 'I feel pity for'?
1
ひとりでも and 多く usage and translation advice
2
Help with the line 誰かと似ていて放っておいても行ってしまいそうだからね
0
言ってた I said or You said
2
Convoluted translation attempt 世界のすべて城砦に抱く
1
Sentence meaning - 「それにしたって」, 「だったっていうんですもの」, 「で」
2
Difference (if there is any) between 知るか and 知ったことか
0
Question about a possible meaning of "この先も"