How to read this sign and what it means?

A friend sent a picture he received from another friend of this framed parchment with some very flowery and old looking Japanese written on it asking me if I could read it and if I knew what it meant: 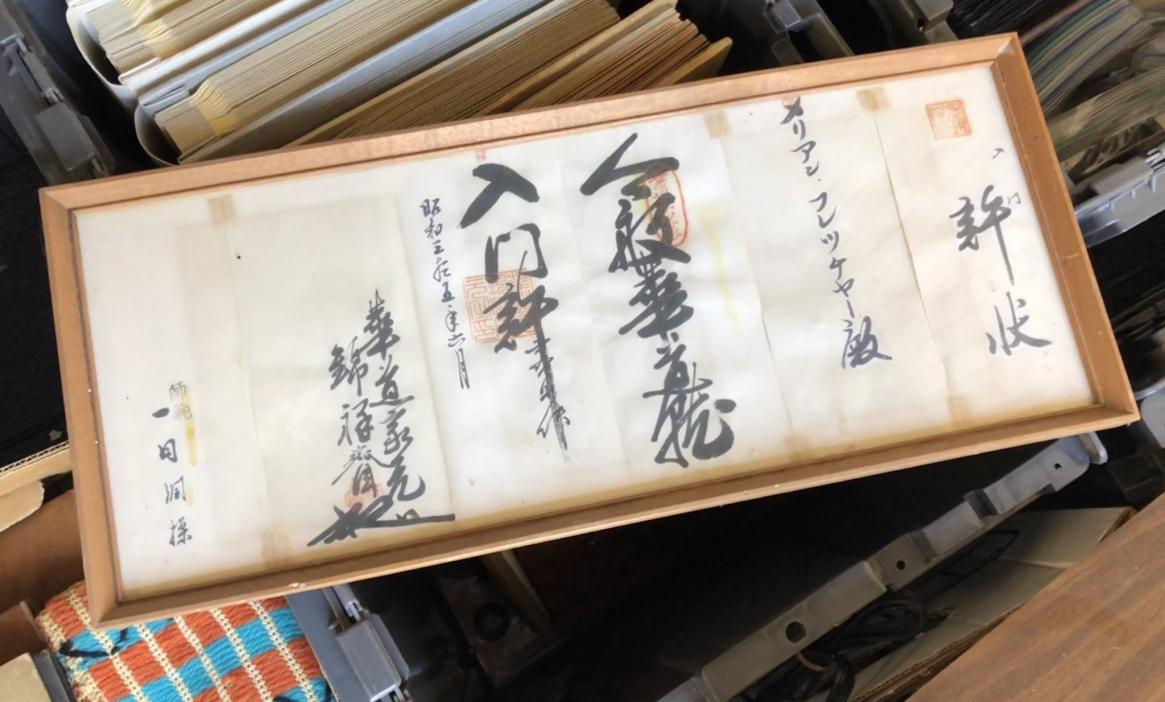 I've done my best to try and figure out what the characters are so far in the time since I was sent it, which was only a day ago as of this post.

With the help of some other Japanese people and a Chinese friend, I've scrapped together this so far:

The Chinese friend I spoke with, since I'm pretty sure this is really old if not styled like old Japanese, where it's just Chinese but there is a Japanese way to read it, suggested a couple of things.

One is that instead of 般 it could be 级 which I believe is 級.
He also wrote out what he thought the parts at the bottom were in Chinese which came out to be:

And from what I can tell and from what I looked up, it appears to be the same thing in simplified Chinese as what the initial Japanese person I spoke with wrote down.

Pretty much no one I spoke to could read the kanji after 入門許 that have been written over with that extra long stroke in 許 and while I don't know if anyone here could read it, I can't make any sense of it myself with how thick that stroke that's covering those kanji are so I understand if it's practically impossible to decipher it. That being said though, my Chinese friend was able to make out what he thinks the first one after 許 is which he said was 祥.

I have yet to try to figure out what this means in detail, but from a couple of words that do come up in a dictionary, mainly 許状 and 入門, my very vague guess is that this is some permit/license for either entry/passage to somewhere or instead a license like indicating entry into like a field/school of some art/skill.

Aside from those two words, the things I'm fairly confident I know what they mean are the name of the person, Ms. Merian/Marian/Marianne/Melyan/Merrien Fletcher, and the date written towards the end, which is June 1960 (Showa 35).

It is an older style of formal writing that today no one practically use except in those traditional circles. The content is an entrance permission to an ikebana school, which probably retains the traditional master-and-apprentice style tutoring.

My reading is as below (most of your decipherment looks valid to me):

The lines begin with 今般華道就入門許… is the body, and the eight characters could be read in the completely Japanese word order: 今般華道（に）つき入門（を）許す… "Hereby grants your initiation regarding ikebana..."

Several characters that are entangled with 許 are too unclear in this resolution. I can only see the last one resembles 件, so I can make a guess that it contains a fixed phrase like 仍如件 "that is all". Anyway, a close-up picture should be helpful.

The leftmost section is very difficult to make sense. It could be a name of her direct teacher (if it's a personal name, I have totally no clue), but two characters in the middle just look like 同 and 調 to me, then it could be read as "all the teachers (will do something...)" but I'm not very familiar with ikebana tradition.

9
Can Chinese and Japanese calligraphy of the same character be identified as such?
13
What does this fish market banner say?
1
How to read kanji entry from Takoboto dictionary
2
Japanese kanjis and Chinese characters: a request for comparative stroke order
1
Few questions about this quote 力求むるも、修羅に染まれぬか！腑抜けが！
0
How Japanese speakers deal with Kanji reading/understanding
2
What are these kanji? (Image)