I'm trying to translate the following sentence, and I need some help with locating and understanding possible nuances for translating 錆の浮いた.

The two best possible translations of it ("become loose" and "to float") both work in the overall sentence; however, the issue is I don't know if there are any nuances that would lead to one being more accurate than the other.

Any advice or tips will be helpful.

Possible translations I've come up with are:

Furthermore, the exit and entrance to the room is only one iron door with floating rust particles.

Furthermore, the exit and entrance to the room is only one iron door loose with rust.

Furthermore, the exit and entrance to the room is only one iron door loose with rust particles.

Edit: The translation I am going with is:

"Furthermore, the exit and entrance to the room is only one iron door peeling with rust."

Realized this is what the sentence possibly meant thanks to the very helpful suggestion via comment by sazarando.

Their thesaurus entry for 錆が浮く may help you discern the actual meaning.

As far as the phrasing goes, it's important to note that one of the senses of 錆 is:

The bold part is consistent with pretty much all senses of 浮く and 浮ける: something comes to the surface. This is true for the common English translation of "to float". However, in cases like rust on a piece of metal, describing the rust as "floating" is clearly not the correct turn of phrase, and you should probably try some other wording, perhaps even something simple like "rusted".

I may have gotten the wrong end of the stick at some point (and if so, I hope that a native-J contributor might chime in), but when it comes to the phrase 錆が浮く, I really think that translating 浮く here as "float" is missing the mark. Have a look at Google Images for the phrase "錆が浮いた" and you'll see lots of hits related to things simply "being rusted". There's nothing about "floating" at all, not even about rust flaking off. Nor is there anything about "loose". This is one good example: 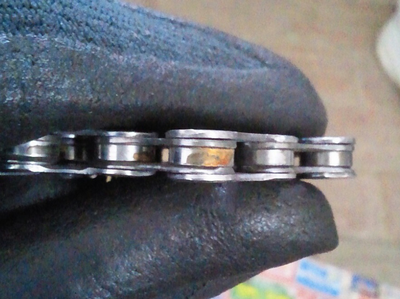 As you can see from the image, the rust is quite minor, with no flakes, and no loosening of the surface in any way.

I'd mistaken your language ability. I'm sorry for that. I'd like to encourage you to work on your Japanese comprehension until you can use monolingual resources -- you'll learn a lot more about any language when learning about it "from inside", as it were. :)

In addition, Weblio has many different resources, not just a thesaurus. For instance, if you click through to the thesaurus entry, then look across the top of the page, you'll see 英和・和英辞典, which links through to the E>J / J>E dictionary page for that entry. Sadly, there is no E<>J entry currently in Weblio for this phrase, but you can use the search bar there to find other things. Looking up the E<>J entry for 浮く, for instance, can lead you to the list of usage examples, where we find that 浮く does not necessarily translate directly to just "float".

Even with limited Japanese capability, if you run across a page like the thesaurus entry, try picking apart what meaning you can directly. Also look for clickable terms -- many of the 類語, or synonyms, have clickable thesaurus entries of their own, some of them with full corresponding E<>J entries.

Good luck with your studies!

In Japanese relative clauses, functionally equivalent to English phrases like the bolded part in "the thing that does XYZ", the subject of the clause can take either が or の without changing the meaning.

As such, these two are semantically equivalent:

In both cases, we have 錆[の・が]浮いた modifying (describing) the noun 鉄扉.

When converting a relative clause (that modifies a following noun) into an independent clause (a statement all on its own), we change what we're talking about -- we go from talking about the 鉄扉, to talking about the 錆, so we need to mark the 錆 as the subject using が, rather than a noun modifying something later in the sentence, when we can use の.

If you see a phrase in a relative clause that uses の after the clause's noun, and you'd like to look it up online to confirm meaning and usage, search with both の and が to catch more hits.

Other posts have gone more deeply into the mechanics of using の and が in relative clauses. This is probably the most relevant that I've found:

You might also enjoy perusing the other search hits:

In terms of nuance, it is more like the rust is at the surface. So while the impulse may be to literally say "floating rust particles" it sounds more natural to say something like "loose with rust" or "with visible rust" (such that it is visible on the surface). Unfortunately some companies prefer a literal translation so it depends also how much freedom of judgment you can exercise here.

4
Why can の and が both mark subjects in relative clauses?

1
Interpreting 開ける when talking about 暇なとき
6
How do you say terms of endearment (pet names) in Japanese?
3
Need help with 際
3
Need help with translation/grammar 「なんの」
1
Help with showing lack of a 'because' construct in translating the bolded sentence?
3
What is a good way to translate ではある?
0
Which translation is closer to the original Japanese?
1
Different kanji variations for the same word with same readings but different meanings