How do I interpret this question that ends with よ?

In the 7th book of the awesome High School of the Dead, there's this page: 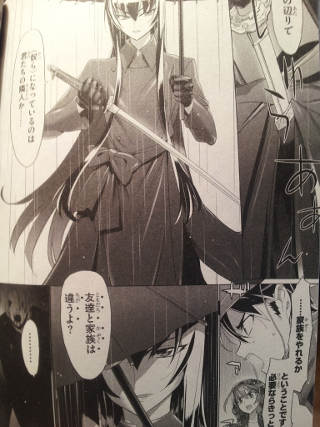 The situation is that the main characters, a group of mostly teenagers who are surviving a zombie apocalypse, are walking through a neighbourhood where some of them used to live.

The character with the sword, Saeko, says 〈奴ら〉になっているのは君たちの隣人だ……. Meaning, "The people in this area that have turned into zombies are your neighbours..." (Not an exact translation, of course - I'm adding more context to help clarify the situation.) She's saying that she should go forward and be in a position to kill zombies because if the other team members recognize a zombie as someone they used to know, then they might hesitate.

Another character, Takashi, who is one of the people who used to live in the area responds ……家族をやれるか／ということですか／必要ならきっとーー. "You mean if we have to kill someone from our family? If we have to we'll definitely..."

That's where I get a little bit lost on the nuance. I get that the baseline of what she's saying is, "friends and family are different", which I think can be extrapolated more specifically to, "killing family and killing friends is different."

But, because it ends in よ, which to me seems like an assertion, but the sentence also ends with a question mark, I'm not sure if it's a rhetorical question as a statement or a sincere question. As a response, Takeshi thinks to a moment when he had to kill a friend, but since I'm not sure of her statement, I'm not sure of the meaning of his reaction.

Is she saying "Killing family and killing friends is different, don't you agree?" Meaning that of course, it's different, so you shouldn't think you can just because you had to kill your friend before. Takeshi was able to actually kill his friend, but maybe Saeko is saying killing family is harder.

Maybe she's asking "Is killing friends and killing family different?" leaving it open for Takeshi to consider the difference. Maybe Takeshi then just reflects on how hard it was to kill his friend, even though he eventually did it, and realizes that killing his family will be a challenge.

Or maybe she's saying "What's so different about killing friends and killing family?" Meaning both are difficult. Takeshi then remembers killing his friend, and this steels his resolve to face up to killing people he might remember.

Or maybe it's something else entirely. Is what Saeko is saying a genuine question? What exactly is the subtext of it?

Also, her words all have dots beside them, indicating emphasis (my understanding of these kinds of dots is that they're like using italics in English). Is the emphasis for the benefit of the character Takeshi, or for the reader? And how does the emphasis impact the meaning?

Apparently my intuition about what counts as a "question" or a "rhetorical question" or "not a question" is absolutely useless, so instead of attempting to describe things with those terms, I will answer this with some potentially interesting usages of the question mark in Japanese and my best attempt at translating them.

For the purposes of the translations, I'd like to add that I speak British English, and also I play loosely with the question mark where some people are a lot more strict. I'm perfectly happy with forms such as this in English:

We will proceed with the next item on the agenda, unless there are any questions? No? OK, moving along...*

Yeah, I thought our team played really well. And, that other match? It went to the final game!

Understanding these usages might help understand what Japanese is doing with the question mark.

What's your choice? Holding back is also acceptable? (rising tone)

This corresponds to your example sentence. It's information (よ) with an added nuance of "you might want to incorporate this information into your decisions perhaps?"

You could add "you know?" to this sentence, but if you make a habit of doing that it can become quite repetitive in translation. Depending on how you treat question marks in English, you may even prefer not to use one here.

"You know?" isn't a perfect match -- this sentence isn't explicitly asking "did you know what I just told you?", and you can't reply to it with an いいえ and expect people to infer "I didn't know that."

Hold the ladder steady for me. And make sure to look up, yeah? If my hand slips I might drop this hammer on you.

No response is particularly called for by the question mark. This isn't a "you know?" but just something indicating "this bit's important, I hope you got it!"

Oh, but this discussion is necessary! (you know?) After all, the succession of inheritance has to be performed immediately, then and there! (you know?)

An example of how constantly translating as "you know?" can get ridiculous. The speaker's tone throughout the sentences, added by the two よ？s, is "Do you realize that your position doesn't stand in light of the facts? Are you sure you know what you're talking about?", but adding "you know?" constantly is like adding 、分かってる？ constantly to the Japanese. It's not supposed to be that explicit.

But never mind that... a little bird told me you two went on vacation together!

Again I feel like "you know?" is misplaced here. The question mark corresponds to a raised pitch on each of the ぞs, what might be a "light taunting" emphasis on the words "a little bird told me" in English. The tone that indicates you know something significant about the listener.

The right to love, you know(?), only you can give it to yourself.

No response is called for at the point of the question mark, and in fact it would be rude to interject, as the speaker is just about to make her point.

These being the few remaining years of a person successful in life, those around him "warmly"(?) watched over him, feeling the time was his to spend as he pleased--or so I hear, but...

The implication of the question mark is that the author or speaker is unsure that 温かく really does describe the situation accurately.

As for the dots, it implies the character is saying it in a bit more of a "weighty" fashion. The added "importance" of the line is intended to be perceived by both the reader and the characters. Sometimes there will be emphasis dots in a person's internal thoughts; the same applies there, it indicates that the character thinking those words considers them the important part of the sentence.

Not the answer you're looking for? Browse other questions tagged grammar nuances or ask your own question.

1
What is the literal meaning of 'マスコミにバラして'?
4
If から can work as an informal emphatic particle, so can ので?
2
キミの心が、綺麗なのがいけないんだよ? >> What does this mean ? "Why is your heart ,it's beauty made me so hopeless/defenseless against you ?"

5
Is this the correct way of saying attending a school?
5
Why is there a だ in もっとだ?
3
も and the double を in それこそ ハイエロファントグリーンを使えば苦痛を感じる間もあたえず一瞬のうちに
1
Does 'かわいそ' in this context mean 'is pitiful' or 'I feel pity for'?
5
Do Japanese people tend to be vague even when talking about people their listeners know?
1
An expression that means "speaking of X" or "while we're on this topic..."
4
Are なんて and なんか used to emphazise feelings that are not disgust/trying to look down on something in this context?
0
「と」I'm kinda confused with the usage of it here
0
～とは関係なく - ~is unrelated? Regardless of~?