What is the proper way of writing the first stroke of 言? [duplicate]

I am wondering why is it that 言 looks different in different fonts. In Gothic, the topmost part is just a horizontal line while in Google Search, it is a drop. I am really confused about what is really the proper way of writing this kanji.

Handwritten kanji should follow the shapes of [教科書体]{きょうかしょたい} (textbook fonts). If you're unsure of the handwritten shape, you can utilise font previews to check what they're supposed to be. For example, HG Kyokashotai by Ricoh displays the shape as

Handwritten shapes are different from Gothic, because they come from two separate traditions. Handwriting derives from regular script brush calligraphy (楷書), while Gothic is derived from Ming typeface (明朝体).

The shape of「言」(to speak) can be traced like the following. Note that「言」was originally comprised of one or two horizontal marks in the shape of「一・二」on top of「舌」(tongue).

The handwritten and print styles are both newer than the ancient inscription styles, and have shapes which originate from one of the older styles. However, they will also often develop in their own way, whilst sometimes incorporating features from an older style.

The drop in「言」has long been a brush calligraphy feature (see transition from「Ｂ３」to「Ｂ４」), and was passed on to the earliest print shape「Ｃ１」, but later print styles changed in their aesthetic qualities, and sometimes also re-incorporated features from older inscription shapes.

言's first stroke is different in handwriting and in computer code, mainly because it is more recognizeble in lower resolutions as a horizontal line.

When you are handwriting, you should draw the first stroke like shown in the picture, as a diagonal line: 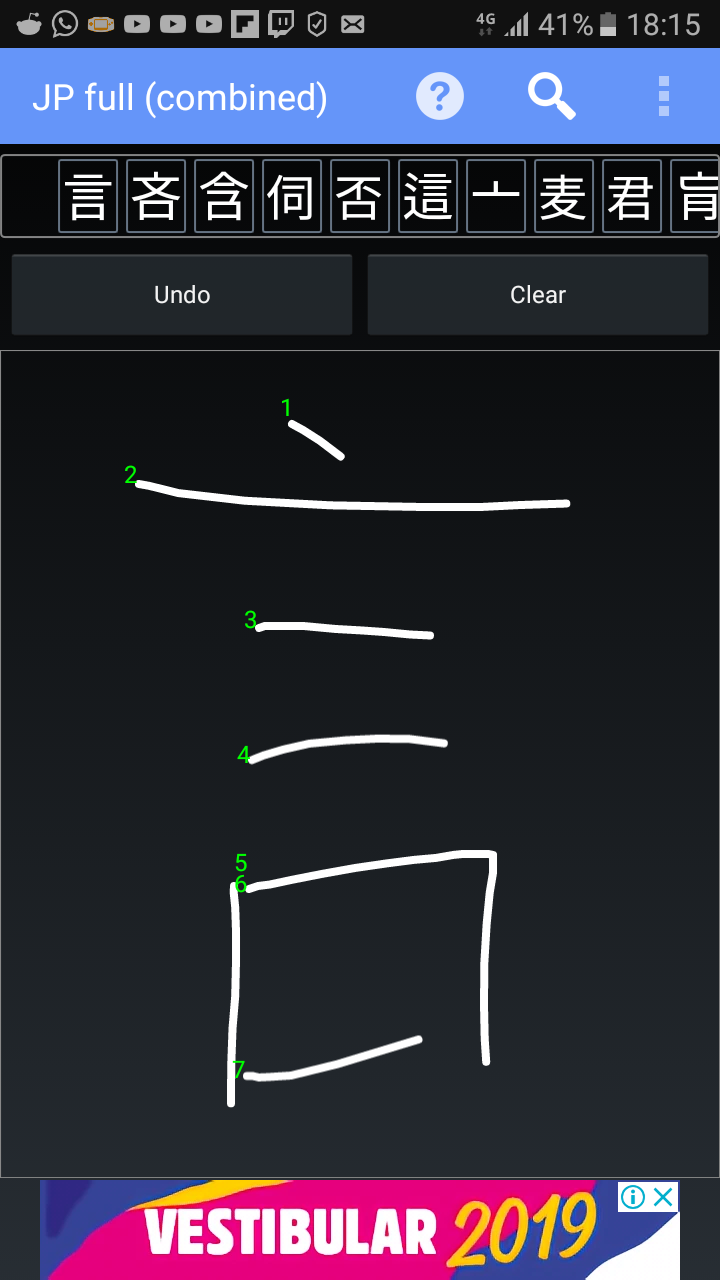 Notice that in most digital media, the word kanji(言)'s first stroke is a horizontal line

Not the answer you're looking for? Browse other questions tagged kanji stroke-type or ask your own question.

8
Is there an “official” font or other writing standard that should be used when teaching kanji?
10
Why is there a difference between the hand drawn 道 and the pc font one?
1
Official definitions of kanji forms

28
Distinguishing certain characters in handwriting and print (Similar-looking Kana and Kanji)
11
What's the deal with/origin of the character 曰?
7
Kanji stroke type (not stroke order)
8
Is there an “official” font or other writing standard that should be used when teaching kanji?
9
Variations in the “same” kanji, how do you know which one to use?
14
Why is there two different ways of writing the 衣 component?
4
Is there any difference between vertical and horizontal writing?
0
How do I know when kana are included in the kanji or inflected?