Are those kanas “しい” ? (text found on a banner)

Today I learnt that "bald tug of war championship" was a thing in Japan, and came across some weird kana that I can't figure out (in the top left corner, underlined in red) : 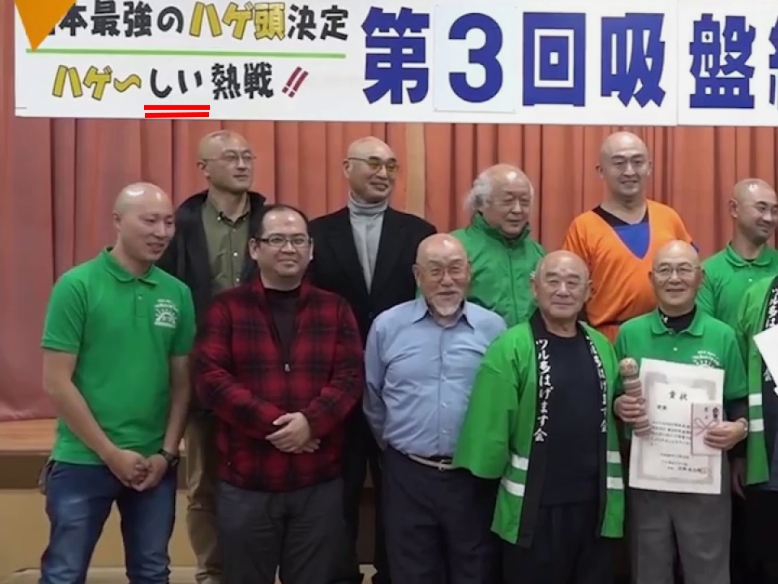 Is it simply しい ? That's what seems the most likely to me, but I'm not a hundred percent convinced. Could it by any chance contain one of the "kana iteration marks" ?

Yes, it is しい. There is a bit of a play-on-words happening here.

[禿]{は}げ means "bald(ness)", but is being written in katakana on the top line (ハゲ[頭]{あたま}). The entire bottom row says ハゲ〜しい[熱戦]{ねっ・せん}. Here, the しい is being used in conjunction with ハゲ (written in katakana) to represent the adjective [激]{はげ}しい, which means "intense" or "fierce". So 激しい熱戦 is like "fierce contest/competition". Also note the elongation mark 〜 used for some emphasis.

So they're making a connection between the baldness and the intensity of the competition by writing ハゲ in katakana in both spots. However, the しい is still written in hiragana to make it obvious that it's 激しい. I suppose they could have written it all in katakana as ハゲシイ, but then it might not be as obvious and the meaning could have been lost.

Not the answer you're looking for? Browse other questions tagged kana puns or ask your own question.

10
What are the origins of 掘った芋いじるな (hotta imo ijiru na)?
5
Ruby text in Documents
8
Are snowclones common in Japanese?
4
Are many hiragana and katakana found in kanji?
9
What does it mean for the 'feel' of a sentence / text when it's written in all hiragana?
7
Why are long vowels represented differently in hiragana and katakana?
1
What are the small kana words put above kanji called?
1
What are the kana between kanji called?
2
What is the regular kana text of the image?