I keep on trying this type of jlpt questions and I keep on failing. Do you have any recommendation on what to read or what to review?

An example question that I answered wrong is :

My answer is D because this is how I arranged it : と ぎゅうにゅう が 三つ but the correct answer is C which confused me. Why? How do they know that there are 3 fruits? Why not 3 milk? 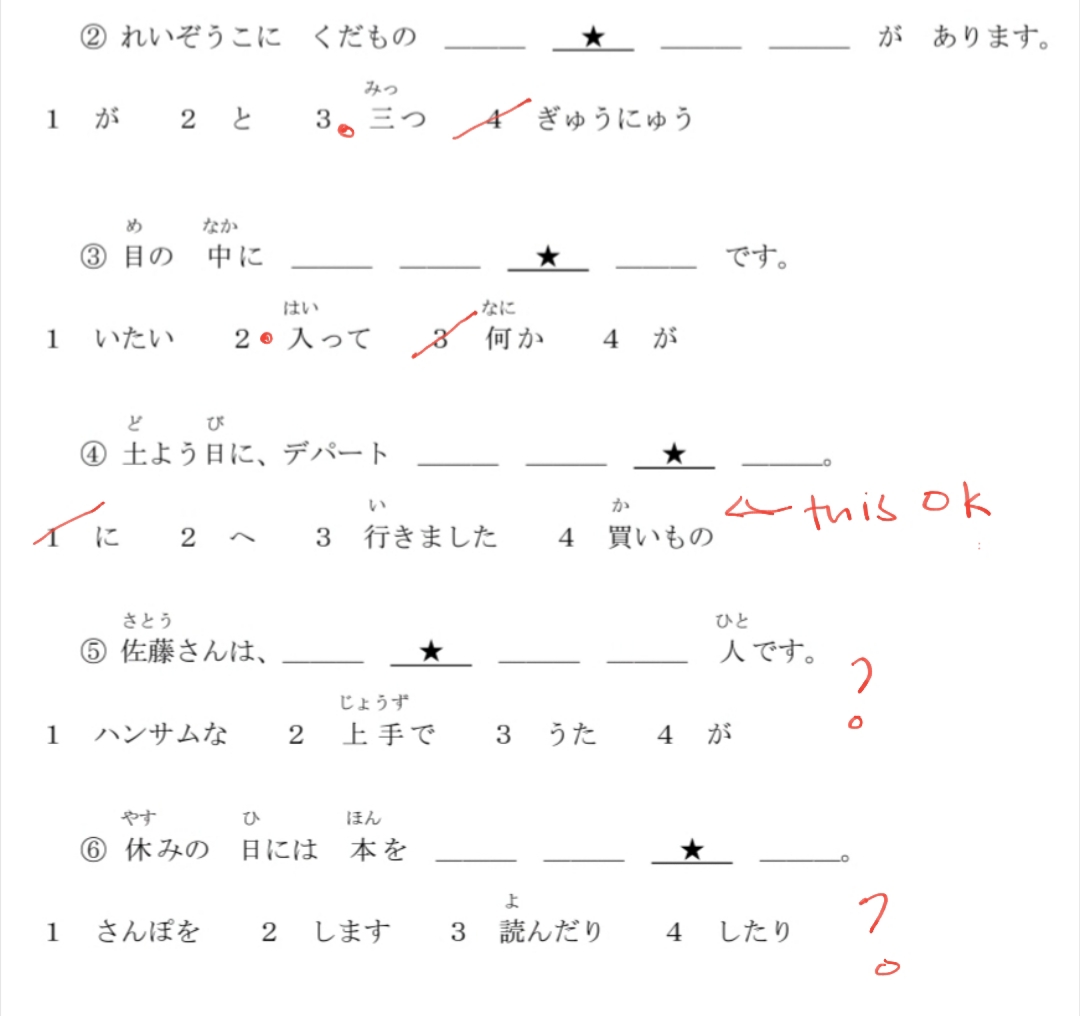 *edit: The main question here is : Do you have any recommendation on what to read or what to review or how to attack these type of question? (Not just the example I have given which people tag as duplicate, I am concerned with this sentential type of question)

Rather than just solving your exercise (which is not the point of this website anyway) I'll try to give you general suggestions about how to approach this kind of problem.

What is the sentence talking about? It's an obvious question but it's important.

Exam tip: If you have no clue or it's too difficult, maybe with some kanji/words you really don't know, you might want to consider just guessing and moving forward rather than wasting time. Or you might leave it blank and go back to it in the end if you have extra time, which you probably won't.

What is the topic? Who is the subject? What is the object? It seems trivial but it's really the most important thing to do.

3. Put the particles in place.

Point 2 is crucial to understand where the particles go. Where do you have to put は、が、に, etc? If you are unsure, use logic!

Let's take the second sentence as an example (number 3 in your sheet):

From the grammar you have studied, you should know that 入る wants が... oh, so that が most likely goes before that verb. This at least makes you put が入って together. Can this follow に？ Wouldn't make much sense right? So you know also that the first _ is not が. Following similar logic you can guess that out of all the remaining options, only いたい makes sense before です. So you also have the last _. Hence, just with logic, we can conclude that only 何か can go in the first place.

Note that this has been derived only with logic/common sense, with only a minimal need for grammar knowledge/translation!

Again, use logic. If you have adjective to place, they most likely have to be attached to a noun. See question 5 in your post? ハンサムな is an adjective. You only have two nouns to choose from うた、and 人. It's not hard then to understand which one you have to attach it to. Doing this, you have already covered one blank. What remains? A noun うた, an adjective plus a verb 上ずで (notice that で is です without the す as it is connecting what's coming next. See this related question), and が. So where does everything go? Certainly が doesn't go in first place, which leaves two options, of which really only うた works. In turn, then it is easy to conclude that the only thing that makes sense is:

Basically this includes a lot of what I mentioned in points 3. and 4. already. When in doubt, simply exclude obviously wrong possibilities.

Let's look at question 6 for this and assume you don't remember the たり・たり・します grammar (cause if you did, this one would be easy).

Before the first blank you have 本を. Well, certainly したり or します cannot go there... you don't "do a book" right? Same for さんぽを. It sounds strange to have two objects one after the other right? After all you expect a verb after that を. This leaves just one possibility: 読んだり.

Because of what I just said above, from here you can easily conclude that.

Now, your first example is actually a bit tricky. It's hard to go by exclusion because the first thing that comes to mind is to put that と right after くだもの.

Because from point 1. of my tips you understand that we are talking about stuff that is in the fridge. And there is fruit and milk. So makes sense that you expect くだものとぎゅうにゅう.

However, if you try to build it from there, you cannot arrive to anything that makes sense. If you used the exclusion principle I talked about, you would realize you reach to a point where something is odd.

But still it's tricky to understand. The point is that that がみつが doesn't make much sense. Again without mentioning grammar, if you think about it what does it really mean? There are 3 milks? Or 3 fruits? Or 3 or both?

This means that probably there is a better option, which is:

Even if you don't understand the grammar exactly, the sentence should make much more sense this way: there are 3 fruits and milk. No possibility of confusion.

To conclude, maybe mine is not a perfect method, but it should help getting through this type of questions even when you have no clear grasp of the grammar behind. Logic is a great weapon, and it allows you to get to the right answer with less information than you think you need.

Let me add 3 good points in an answer by Naruto that has been linked to in a comment.

To understand your first sentence you have to know:

1
Listing two different object
14
How to list numbers of things
-1
Why is this sentence not separated? 圧着部分を図１，２のように交互に折り込みドリッパーの内側にピッタリと装着します。

19
Why isn't a large amount of money a good enough reason to kill someone?
9
たたく versus ぶつ in a JLPT question
5
Help with this sentence fragment containing "思想統制"
3
Use of the "へ" particle when asking about transportation methods
5
How to differentiate between references in past to mean "last time" or "earlier"
1
Trying to make sense of some JLPT practice questions
3
Understanding correct choice on N1 grammar question
5
Difference between ものだ, ことだ and ものがある?
3
What is the right order of this sentence? (JLPT N2 practice question)