What is the correct counter to translate 'One Piece'?

I was wondering whether the anime is actually called that way because it is hard to convey this meaning in japanese with a single word. For those who are not aware, One Piece is the greatest treasure in the world buried in one place, so it is probably something huge and not having clear bounds.

Can we translate 'One Piece' to japanese better than 一個?

Okay... ワンピース has been referred to as ひとつなぎの大秘宝【だいひほう】 (literally "unseparated great hidden treasure") several times, so you may think this is the official "Japanese translation". 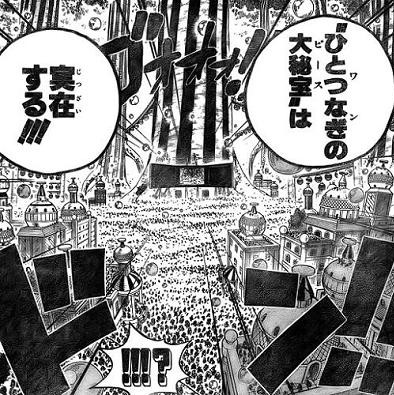 一個 is just a mundane phrase used to count small objects, and it makes no sense as the name of a treasure. Basically it's very hard to talk about the correct counter for this "piece" since no one knows what it is like. Choosing a counter may give the readers a big hint of what it is like. For example, if we called it ひとかけらの秘宝 using a counter かけら ("particle", "fragment"), it would end up assuming One Piece is a tangible hard object that may break. ひとつなぎ ("unseparated", "one big") is a clever word choice that avoids this problem.

One Piece (ワンピース) is the proper and formal name of the titular object. It wouldn't make much sense to refer to it in any other way since, if you were referring to it from an in-universe perspective or discussing it with fans, any other reference wouldn't make sense for the conversation.

Not the answer you're looking for? Browse other questions tagged translation word-choice counters anime or ask your own question.

22
Why is the correct counter for rabbits 羽（わ）
25
Is there an equivalent to George Carlin's “Seven Dirty Words” in Japanese?
10
Preferred beginner's term for “flight”?
5
How are “comfort women” referred to nowadays?
2
(one piece) バウンドマン means Bounce man or Bound man?
2
how to translate xfx and / or onomatopoeia of the one piece manga
4
Referring to Group of Differentiated Objects
1
Why concatenate three names into “PiPoPa”?
2
だって, なんだって and some other interpretation questions
1
Unusual words in anime